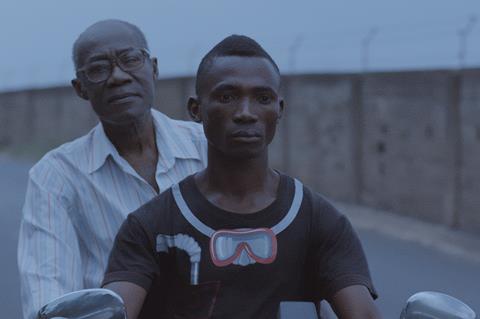 Key events in postcolonial Africa are revisited with a languid, reflective gaze in Equatorial Constellations. Silas Tiny’s impressionistic documentary unpicks a complex tale of the humanitarian response to a vicious 1960s conflict and the legacy that endures from it. Challenging material is handled in a gentle, thoughtful manner that should commend the title to festivals with a political or human-rights focus.

Tiny makes the viewer work hard for moments of understanding and connection to a conflict that may be unfamiliar to some. On-screen titles provide densely packed information on a chain of actions and consequences that began in May 1967, when Colonel Odumegwu Ojukwu declared Biafra independent from Nigerian rule. Nigeria responded with a military offensive that sparked a civil war in what came to be regarded as the first postcolonial conflict on African soil. The geographical proximity of Portuguese colony Sao Tome made it a critical base for airlifts and concerted international efforts to save hundreds of Biafran children from starvation.

It is these children of the revolution who provide a connecting thread across the film. The first images we see are taken from identity records of the children who were brought from Biafra to Sao Tome. Against a soundtrack of gunfire and buzzing airplane engines, we glimpse a gallery of faded, sepia-tinged photos of the refugees. Later, elderly nurses are asked for their recollections of the time. Imperfect memories mean that they are often unable to recall individual children, but they do remember vividly the mass of youngsters who arrived wounded, naked, dehydrated, bellies swollen with hunger and desperately frightened. Old audio tapes include interviews with some of the children, one boy proudly declaring, “My father is fighting for Biafra”.

Archival material is sparingly used throughout the film. We see boys drilling with wooden weapons, we see UNICEF supplies “donated by the people of the USA” and footage of the destruction suffered by Biafra in 1968. It is clear that the period has left a scar on Sao Tome and its residents. There is still physical evidence of the part that Sao Tome played as a staging post in the humanitarian efforts. Abandoned airfields and rusting planes are all around. A plane flopped on the top of a building seems to have grown into the walls. One building is now under six inches of water, and children treat it as a playground. There is no escaping the past or the way it is embedded in the memories of a generation.

Tiny features interviews with those who worked in the Air Force, who offer further perspectives on the uneven nature of the conflict and the religious element of the war between Nigeria and Biafra. The Igbo people of Biafra were overwhelmingly Christian and mostly Catholic, whilst Nigeria has a majority Muslim population.

Equatorial Constellations stitches together scraps of memory, individual testimony, newsreel footage, poems by Nigerian novelist and writer Chinua Achebe, and shots of modern Sao Tome. Tiny also adds the ghost-like presence of an unidentified man who drifts through the island contemplating the abandoned foreign airplanes and buildings that played their part in housing the Biafran children. It is uncertain what he might represent, perhaps one of the children returned to reflect on events that now seem long ago and far away. Further titles inform us of Biafra’s fate in 1969 when the Red Cross International suspended all its humanitarian flights and Ojukwu proposed a ceasefire. Outside of Africa, Haiti was the only country to officially recognise Biafra.

Tiny includes the names of those interviewed in the closing credits of the film. We only discover their occupations in the course of their testimony. It is not a film that spoon-feeds the audience, but that in turn might provoke a feeling that there is a whole lot more to discover of what happened in Biafra more than fifty years ago.