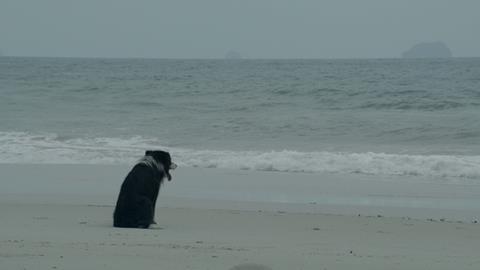 Olmo Omerzu’s second feature is an impressively controlled drama which slowly reveals a bleakly ironic tone as it traces the disintegration of a seemingly happy bourgeois family. (The Prague-based Slovenian director’s well-received debut, A Night Too Young, premiered in the Berlinale Forum in 2012.) On the surface, this follow-up is a rather arid, chilly exercise with a touch of Michael Haneke or Ruben Ostlund, but behind the director’s detached, anthropological view of the human condition lurks an unwavering commitment to six troubled characters (seven, if you include Otto the dog).

Brilliantly measured, yet for this reason also tense and edgy in its charting of a dissolution, Family Film needs no Funny Games descent into malice to make its point

Premiering in the New Directors sidebar at San Sebastian, Family Film should go on to score further festival invitations, and may even travel a little. But potential distributors would do well not to take the (ironic) title too literally: this is a very grown-up number, strictly for audiences with a taste for bracingly cool tales of human weakness.

A BBC-style nature documentary playing on the passenger headrest monitor of a family car in the opening scene neatly makes two points. One is that the cultured, liberal Prague family of four travelling inside this high-end saloon with well-trained mutt Otto is affluent and techno-savvy. The second is more of a premonition, as a mating battle between male toads leads to the loser “heading off to start a family in some other part of the pond”. The standard-issue family unit – a sure signal of impending dysfunction – consists of 15-year-old Erik (Kadlec), his older but still school-age sister Anna (Bokova), and their seemingly grounded, loving parents Igor (Roden) and Irena (Hybnerova), whose professions are never revealed.

Ma, pa and faithful Otto soon head off for a long-planned sailing holiday that will take them island-hopping across the Indian Ocean, leaving the two teens to look after each other in their tastefully furnished, white apartment. No sooner have they gone than Erik and Anna invite their best friends over to stay. Anna’s sexually provocative bestie Kristina (Krenkova) soon seduces Erik, something his sister doesn’t particularly like, but doesn’t prevent – as she’s rather in awe of a girl who is far more confident and daring than she is.

Brilliantly measured, yet for this reason also tense and edgy in its charting of a dissolution, Family Film needs no trashing of the apartment, no Funny Games descent into malice to make its point. Which is that the two siblings are only following their parents’ lead in acting all laid-back and cool, while the parents need this illusion of their kids’ maturity to paper over the irresponsibility of their indulgent tropical getaway, pretending that a series of irregular Skype calls (during which mum shows how liberated she is by appearing half-naked) can stand in for proper parenting.

When they are disabused by the revelation that Erik has been skipping school, dad Igor summons his younger brother Martin (Pechlat) to Prague to take charge of the situation – neatly setting up a last-act twist.

Family Film’s washed-out colour palette suggests a world of muted, designer emotions that can be controlled at the flick of a dimmer switch or a TV remote (it’s telling that mum and dad’s Skype video calls appear on the same huge TV monitor that the siblings and their friends use to play violent video games). Set against this pretence of bourgeois tranquillity are the harsh realities of nature – the unpredictable sea, the spectre of sudden disease, Otto revealing his fangs as he desperately bites the bars of his cage in a jet’s cargo hold, the threatening naked male bodies that surround Erik in the thermal baths where Martin takes him for a misguided uncle-and-nephew bonding session.

Omeru takes a risk, towards the end, in prising us away from the Prague storyline to follow Otto the dog’s forlorn, canine-Crusoe struggle for survival on a deserted tropical island. But it’s a calculated risk, and it pays off: by now we can read the subtext in this dog’s desperate fight for life in an unfamiliar jungle where his human masters have, in his mind, abandoned him. And despite the bitterness in this subtext, we still nurture the hope that Lassie may one day find his way home. It’s this ability to juggle and dissolve two cinematic registers, the family adventure and the dark, ironic human drama, that makes Omeru’s second feature such an impressive achievement.