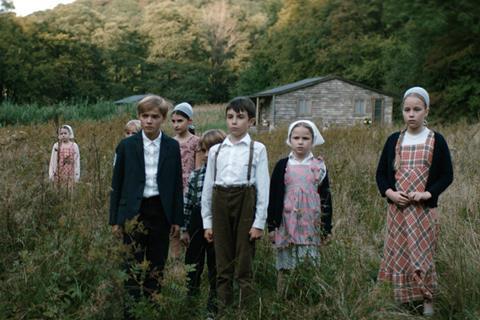 Equal parts allusive and elusive, Good Favour tiptoes around weighty themes like Christ walking on water; though the film certainly gets its toes wet, it never fully dives in. The third feature from Irish director Rebecca Daly, Good Favour is a measured parable about a secluded religious community and the sunken-eyed adolescent who may be its saviour, and like so many parochial texts, the film seems more interested in asking questions than in answering them.

Viewers are simply asked to sit tight, ponder the central concern, and let a number of striking images wash by

By taking such an ecumenically non-committal approach, Daly has delivered a film that will preach to a rather self-selecting congregation. Further festival play will likely yield polite notices, and though fans of the director’s moodily atmospheric debut The Other Side of Sleep will find much to admire here, this latest effort isn’t likely to gain her many new converts.

The film opens with an eerie stagger, as the zombie-like Tom (Vincent Romeo) stumbles out of some lush European forest. Grey-toned and seemingly two breaths short of rigor mortis, the orphaned 17-year-old silently makes his way to a nearby religious commune and promptly collapses. The village elders – including taciturn Mikkel (Lars Brygmann) and the skeptical Hans (Alexandre Willaume) – don’t quite know what to do. On the one hand, their never fully defined sectarian faith implores them to take in the homeless and treat the ill; on the other hand, that same religious passion has pushed them into societal seclusion for a reason.

Once they the do allow the mending boy into the fold, the film takes on an almost ethnographical air as it follows the children, elders and new members of this hermetic parish going about their days, cataloguing their various activities, religious rituals and routines. The village’s children, and eventually its elders, begin to see Tom as messianic figure, believing him gifted with holy powers.

As Tom assumes a more assertive role as a religious leader, he strikes up a distinctive bond with fellow 17 year-old Shoshanna (Clara Rugaard), who shares an early scene with him that essentially sets the stage for everything that follows. When she walks in Tom getting changed, naked as the day he was born, the shot evokes the adolescent pangs of sexuality that no amount of burlap clothing or pastoral seclusion could ever hope to subdue. On another level, one can’t help but notice Tom’s various wounds, all of which rather perfectly line up with the patterns of stigmata. Is Tom a Christ-like avatar, capable, as so many believe, of enacted miracles? Or is he just flesh and blood, naked and afraid like every one else? In short – is he sacred or profane?

Daly and regular co-writer Glenn Montgomery’s script never fully answers that central question, instead opting to repose it several times over in a number of different guises. They weave in additional asides about refugees and social seclusion (the characters all speak in English, though when the local authorities pop in for a visit, it becomes clear that this is a German-speaking country) but few narrative or thematic threads yield significant pay offs. One is simply asked to sit tight, ponder that central concern, and let a number of striking images wash by.