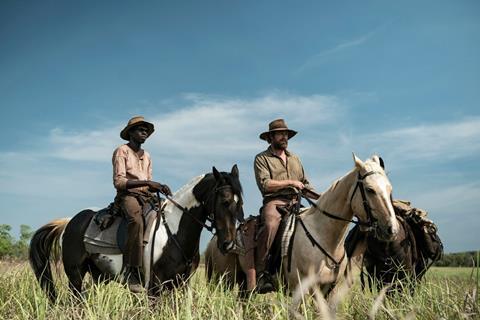 Set during the tail end of Australia’s Frontier Wars (violent conflicts between Indigenous Australians and white settlers which spanned a period of nearly 150 years), High Ground takes as its dual focus a white man who rejects his role in the police after an operation descends into a massacre and Gutjuk (Jacob Junior Nayinggul), the native child who survives the massacre and is raised by the local missionaries. The two are reunited 12 years after the event when Gutjuk’s uncle leads an indigenous gang, the Wild Mob, on a series of attacks against white property. The uneasy collaboration between the white bounty hunter and the young man whose family was slaughtered by white guns might, it’s hoped, prevent further carnage.

The drama plays out in a series of fraught confrontations

Such a complicated and messy period in Australia’s history is always going to be a highly charged area to explore. The decision to equally foreground a white man’s story might lead to some criticism, particularly as that character’s actions and attitude seem as much informed by contemporary guilt and desire for reparation as they are by period accuracy. That said, the film, which director Stephen Maxwell Johnson has been working on for two decades, was developed with the close participation of cultural advisors from various Indigenous clans and is unflinching about showing the brutality meted out to native people. Potential distributors attracted by the striking visual impact and stirring action of this frontier Western will need to embrace the need for careful and sensitive marketing.

In both the backdrop – the indigenous ancestral lands of the Northern Territories – and the period – the early part of the 20th century – the film invites comparisons with Warwick Thornton’s Sweet Country. But while Thornton’s outlaw pursuit story had clearly delineated heroes and villains, High Ground is rather more complex. The film asks us to empathise with Travis (Simon Baker) a character who, whatever else he does in the story, is introduced to us with his gun trained on a native community which largely consists of women and children.

A sniper in WWI, Travis now finds himself increasingly at odds with the perma-sneering Eddy (Callan Mulvey), his spotter during the war and now a fellow officer of His Majesty’s Government. Travis quits in disgust after the massacre, but is drawn back in 12 years later when the vengeful Baywarra (Sean Mununggur), Gutjuk’s uncle and fellow survivor of the carnage which wiped out their people, crosses a line and kills a white woman. Meanwhile Gutjuk, rechristened Tommy by the missionaries, sees in Baywarra the male role model that was stolen from him as a child.

There is little trust between Travis and Gutjuk when they set out with the intention of peacefully bringing Baywarra in to face justice. But the pair are forced to work together when they find themselves targeted in turn by Eddy who having questioned Travis’s loyalty, doesn’t like the answers that he finds. The drama plays out in a series of fraught confrontations which frequently end with a body count.

Locations are arresting, and the sculpted landscapes of the wild country are captured with lots of sweeping drone shots, a nod to the hawk imagery which is a key element and refers to the translation of Gutjuk’s name. And in the magnetic Nayinggul, superb as the boy on the brink of manhood who must choose whether to reject anger or embrace it, the film showcases a notable new talent.