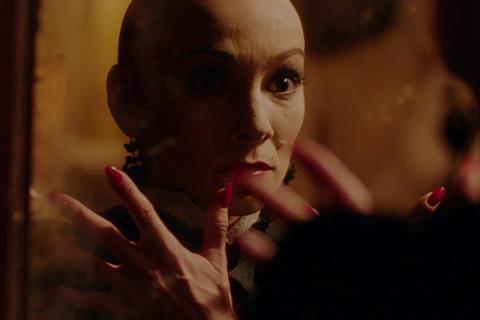 Can you be nostalgic for an era you can’t really remember? Director Peter Strickland may be in his 40s, and his films shot through with modern ambiguity, but they’re driven by a fond appreciation of retro pleasures like early-`70s kitsch, sensationalist Euro horror and lost-in-translation dubbing jobs

In Fabric feels like some rediscovered, 40-year-old Italian giallo, which seems to be Strickland’s intention

Premiering as part of the Toronto International Film Festival’s Midnight Madness program, In Fabric combines all those directorial obsessions, and adds a few more. A perverse (and often perversely funny) genre film, it’s sure to do well in similar festival berths although, like Strickland’s previous works, seems unlikely to move past cult status to mainstream success.

Set in a dreary post-Christmas London, at its simplest the film is the story of a diabolical department store and a haunted dress. Red as hell and just as damned, the frock fits whoever buys it. But its flattery comes with a price, the toll ranging from scabrous skin conditions to exploding washing machines.

Frankly, that’s just enough material for a short story, but Strickland’s script stretches it out with sideshows. Although we spend most of the running time with one owner – played by the stoically long-suffering Marianne Jean-Baptiste, who only wanted a nice outfit for a blind date – it then falls into the hands of a second owner, slack-jawed Leo Bill, who brings it home for his wife.

As eclectic as the film’s tones are – there are also a few interludes of Office-Space-style satire – the performance styles are just as far-ranging. As a weary single mother, suffering through an awful job while returning gingerly to the dating world, Jean-Baptiste does the sort of thrillingly realistic work she’s brought to her roles since Secrets & Lies. An underplaying Hayley Squires is another quiet standout as one of the dress’s fans, Bill’s increasingly frazzled bride-to-be, yet other portrayals push things far further, ranging from the slyly ironic to the broadly grotesque.

It’s a mad mixture – and,one which sometimes descends into simple, maddening obscurity. Why are there what appear to be racks of clothes in a bank executive’s office? What sort of bachelor party includes forcing the guest of honor to dance around in a dress? And what exactly is the point of all this the-devil-sells-retail business? What do these monsters hope to gain?

That both of the main characters in In Fabric take time to recount dreams they’ve had is perhaps the director’s biggest explanation, or excuse. This is a film with the logic of a dream, which is to say, no logic at all. But it also has the power of a nightmare. And, like some of them, it lingers.