'In The Fade': Cannes Review 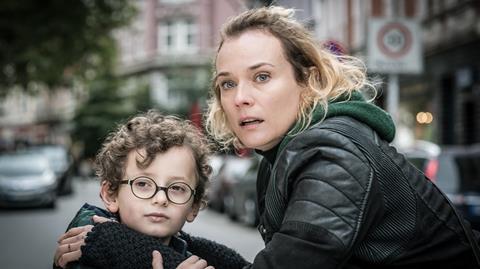 A forceful Diane Kruger is the main asset in this unfortunately-timed drama about a woman who loses her husband and her six-year-old son to a terrorist attack. Divided into three chapters, the film explores the events immediately before and after the run up to the bombing; the court case and, finally, Katja’s (Kruger) quest for retribution. Doggedly conventional in its approach, the film walks an uneasy line between unflinching honesty and crass emotional exploitation, before tipping into the latter in a questionable final act.

The story is riddled with questionable plot devices

A meaningless English title (the original German title, Aus Dem Nichts, literally translates as Out Of Nowhere) is just one of the issues that the film will have to overcome in order to connect with an audience. The most significant is whether word of mouth and critical support will be sufficient to coax punters past the wrenchingly bleak subject matter. Kruger’s performance, although not wholly consistent, is of the awards-friendly, bared nerve endings variety. High profile prizes are not out of the question, for Kruger at least, and would provide useful marketing leverage.

A pre-titles sequence, shot on emetic, erratic camcorder, shows Katja marrying Nuri (Numan Acar). That he is in prison and their wedding guests are uniformed guards does nothing to dampen the joy of the occasion. The first chapter of the film, titled ‘The Family’ sketches a marriage which remains happy, now that Nuri is out of prison and the couple have a six-year-old son. But then a nail bomb attack robs Katja of everything she cherishes. And the rain starts to pour, soaking the Hamburg backdrop with metaphoric meteorology.

This first section is the strongest of the three. The casually scattered mess of family life suddenly becomes loaded with an unbearable weight of tragedy. Katja’s Turkish in-laws and her hatchet-faced mother eye each other with thinly veiled animosity. And in response to her request to see the bodies of her loved ones, the policeman cautions, “They are no longer people, only body parts.” Even so, the story is riddled with questionable plot devices, not least the decision to have Katja score drugs from her attorney and do a load of coke at a moment of unimaginable stress.

The striking monochrome colour palette, accented with mournful blues, is carried forward into the second section, titled ‘Justice”. A courtroom sequence in which the suspects, a husband and wife, are tried, this mid sections starts well, but crumbles during questioning. It’s here also that Kruger’s otherwise impressive performance wavers. Some of her reaction shots are second only to the extravagantly evil defence attorney for overblown emphasis. This is heightened by several split focus shots which place Katja in the extreme foreground with her lawyer and the rest of the court behind. A scene in a bar in which Katja speculates about what her husband would have done if it had been her killed instead sets the scene for the final chapter, ‘The Sea’, in which the relocates to Greece as Katja embarks on a far-fetched quest for revenge.