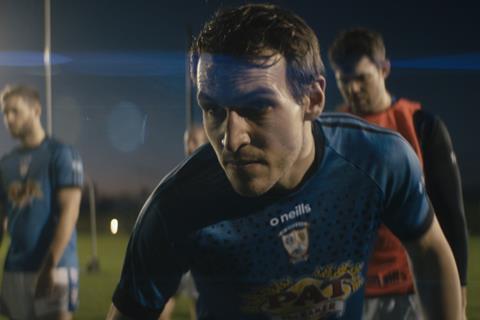 A sensitive exploration of a young man’s reckoning with his destiny in rural Ireland, Lakelands initially appears to cover some familiar dramatic ground in a seemingly low-stakes narrative, but, in fact, this feels fresh, for both Irish audiences and also niche markets elsewhere. Creative partners Robert Higgins and Patrick McGivney thread their deceptively small story with a skein of poignant themes while lead actor Eanna Hardwicke convinces as a lad about a small town whose dangerous concussion forces an uncomfortable facing up to his future.

As Irish filmmaking surges, it’s finding a quiet confidence: Higgins and McGivney are happy to take things slowly in the town of Granard, Longford, where the nearest night out comes via a bus to Cavan, 38 miles away. This is where Hardwicke’s character, Cian, is beaten about the head after a fight in a club. If Cian loses his place on the local football team as a result – this is a town where the Gaelic Athletics Association (GAA) is a key player everywhere, not just on the pitch – then what is left for him, alone on the farm, constantly at odds with his angry father (Lorcan Cranitch)?

The limited number of films to touch on this subject have tended to treat it in an ultra-high-stakes manner – Concussion took place in the American Football League, for example. Higgins and McGivney have the confidence to allow their story to play out: they give Simon Crowe’s camera space to speak, Daithi’s score room to sing, Hardwicke time to think.

Lakelands is a film about the countless young men in the minor leagues of sport who suddenly have to figure out who they are without the game. It can be a little heavy-handed in this insular town with an angry dad, although Cian’s tentative, reinvigorated friendship with the visiting Grace (Danielle Galligan), who has left town for a career in nursing in the UK, softens the piece into a sympathetic reflection on masculinity and being left behind.

The key to the success of Higgins and McGivney’s screenplay is how unknowable Cian can be. He revels in his role of Jack the lad, but rises early to tend to his jobs about ‘my farm’, and is touchingly tender with the animals. He’ll drink to excess, take drugs, and cause fights, and is relying on his own brute strength to take him through his role of captain of the local Gaelic football team, the source of much pride in the community. When he’s beaten up one night after a pointless, drunken argument, it’s a shock to him when that force doesn’t return — although he should have been reading the signs, given it has been eight years since he left school. He still has the self-destructive tendencies of an adolescent, and is mutinous with his hard-arsed father.

There’s a general lack of understanding about the dangers of concussion, and the local community sees it as just another mess-up on Cian’s part (an impatient “what’s wrong with you now?” underlines the ignorance at play). Full of bravado, Cian is nonetheless highly vulnerable, and the film’s strength lies is in how touching he can be, blundering his way into adulthood, trying to find a way through while knowing his future lies here, in this small town.

Scenes set during a wake are touching, and remarkably well-handled. Technical credits work in harmony, camera and score being notable assets. If Lakelands has a close relative in recent film-making it’s in God’s Own Country, but it forges its own path.