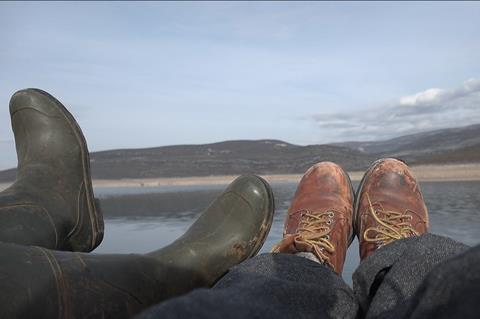 Friendship is a great healer in Looking For Horses. Stefan Pavlovic’s gentle, thoughtful documentary captures the growing bond between the filmmaker and a solitary fisherman living with the aftermath of the Bosnian conflict. Winning the Bright Lights Competition section of Visions Du Reel should secure further festival attention for a touching tale reflecting on the difficulties of communication and the legacy of trauma.

We witness a connection blossom

The son of Bosnian parents, Pavlovic is looking to connect with his past and learn the language of his beloved grandmother. He stops at the village of Orah in Bosnia and Herzegovina where he hears tell of a fisherman who is said to live in a church on an island in the middle of a local lake.

We discover that Zdravko has spent the best part of 18 years living a kind of exile there. Pavlovic’s decision to frame the fisherman in unrelenting close-ups invites us to take a good look at him. Weathered by the elements, his deep lines and gnarled features lend him the appearance of a frontiersman from a Sam Peckinpah western or a character from Hemingway. He lost an eye in one incident and his hearing has been badly affected by his proximity to a hand grenade explosion. Life on the island has given him calm and solitude. A spartan existence has reduced his requirements to a basic minimum of tobacco, gasoline, food and a place to sleep.

The lake is soothingly tranquil. Pavlovic captures the sparkle of its clear waters and a sense of solitude through sun-dappled summer days, views of a twinkling bright moon looming on the dark horizon or dramatic storms when lightning cracks the sky. There is never another human being in sight.

On the surface, how the two men communicate is a problem. Zdravko’s deafness means that he frequently fails to hear a question. Pavlovic has a faltering command of Bosnian and a stutter. Subtitles are often not just a translation of what is said but a wry commentary in which Pavlovic interjects, reflects and reveals some of his past.

We witness a connection blossom as the two men fish, sail on the lake and talk of the wild horses that are said to roam nearby. Before our eyes, they grow more comfortable in each other’s company. Zdravko is able to explain why the lake has become the only place where he can feel at peace. Other people are normally a source of stress. The thought of once again living in a village or a town causes anxiety. Others have asked to film him but this is the first time that he has agreed to face a camera. There is something about Pavlovic’s unassuming manner and compassion that has compelled him to respond. It is not a one-way street as we can see that Pavlovic is visibly moved by their time together.

There are things here that we do not learn - from how Zdravko earns any money to buy supplies, to how he gains access to any medical support he might need. We are only given access to fragments of Pavlovic’s childhood memories where the broken, staccato nature of the images mirrors the stutter in his voice as he strives to express his feelings about the past.

Ultimately, what matters is not what is left unknown but the sense of what the two men have gained and how the world seems a better, kinder place when you have a friend.