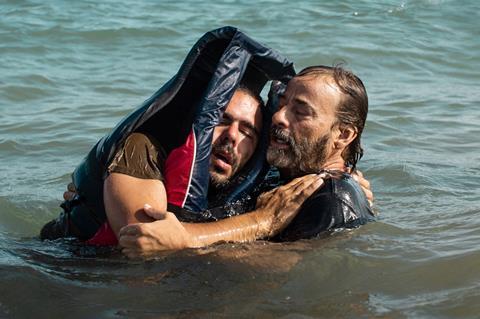 Like many people the world over, Oscar Camps (Eduard Fernandez) was shaken by the photograph of the body of three-year-old Syrian child Alan Kurdi lying on a beach on the Greek island of Lesbos. But unlike most people, Oscar was motivated to do something about it. This stirring factually-based drama tells of a group of lifeguards from Barcelona who travelled to Lesbos with the intention of saving lives, ultimately forming the NGO Open Arms. Marcel Barrena’s directorial approach is unshowy, but there is no denying the urgency of the film’s themes and the potency of this very affecting account of the front line of a humanitarian crisis of unimaginable scale.

Barrena has been drawn repeatedly to true-life stories, first as a documentarian — his film Little Worlds won a Gaudi Award for best documentary — and then as a feature filmmaker. Mediterraneo is his second feature, following 100 Meters, which was based on the real-life story of a man with multiple sclerosis who competed in an Iron Man contest. Following on from its premiere in San Sebastian, Mediterraneo has proved to be a crowd-pleasing addition to several further events: it won audience awards at both the Rome and Ourense film festivals. The picture made it onto the shortlist for Spain’s submission for the International Feature Oscar category but missed out to Fernando Leon’s The Good Boss. With the ongoing timeliness of its themes and its inspirational story of individual human decency in the face of political indifference, the film could potentially find an audience beyond the arthouse sector.

Oscar is an abrasive character with a combative relationship with colleagues who nonetheless respect him. He is also, it becomes clear, a man in need of redemption. His daughter Esther (Anna Castillo), who works alongside him as a lifeguard and joins him on Lesbos, is kept at arm’s length. His absence from her life — she pointedly reminds him that there was a four-year period in which she didn’t see him — is explained by his battle with alcoholism; his tendency to be brusquely overprotective of her is symptomatic of the guilt he feels for his failures as a father. In the central role, Fernandez sometimes struggles to convey much in the way of character complexity, but he, like the film itself, is most compelling in the sequences which depict the jagged terrors and the sheer grinding exhaustion of the maritime rescues.

Right-hand man to Oscar, and the realist to his partner’s fiery impulsiveness, is Gerard (Dani Rovira), who reluctantly leaves his wife and baby son for what he initially believes will be just a couple of days offering support to the local lifeguards. Also on the team is Nico (Sergi Lopez), Oscar’s business partner from back in Barcelona, who finds himself drawn into the mission to save lives.

It is, ultimately, a rather Eurocentric account of the crisis — the only migrant character who is in any way developed is Rasha (Melika Foroutan), a Syrian doctor who haunts the beaches looking for the daughter from whom she was separated in transit. The film acknowledges this with a line from the press photographer who, in an attempt to persuade Oscar to agree to an interview, explains that while readers are alarmed by poverty and desperation, they might find the European perspective more relatable. But it’s fair to say that Mediterraneo could have done more to redress the balance between European voices and those of the migrants.