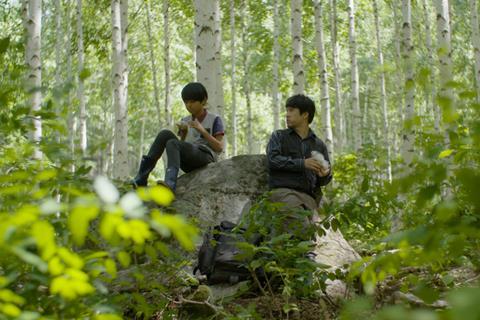 A terminally ill man who ekes out an existence chiselling medicinal mushrooms off trees spends a few uneventful days in the company of the son he never got to know. The meditative pleasures of this low-key drama are hard won – it takes quite an investment of patience to sink into the subdued rhythms of mountain life. But this most delicate of dramas does reward those with the commitment to stick with its melancholy, meandering pace.

The slowest of slow cinema, this is a film which will likely find its warmest reception within the festival circuit, where audiences are prepared to rise to the challenges of a picture which shows the end of a life, in mournful, measured detail. Given director Kim Mooyoung’s alternative endeavours – he is a visual artist – at least some of this strikingly photographed film might also find a home in a gallery space.

Kim favours long, watchful static shots which frequently capture moments of quiet devastation juxtaposed against the mundane grind of life. The film opens with Hee-tae (Song Jae-Ryong), grey skinned and stricken, in a hospital bed. There follows a beautifully acted scene between Hee-tae and, we assume, his mother. It’s a moment of understated tragedy, featuring two people who know they have run out of options. She quietly admits that she has no money left and suggests that he could sell his shop to pay the medical bills that weigh almost as heavily as his diagnosis. Hee-tae’s stoic mask cracks – a twitching cheek muscle is a giveaway – when she hands him a letter from his ex-wife and the mother of the child he has never met.

With not much in the way of other options, Hee-tae returns to his hardscrabble solitary life in a shack on the side of a mountain. The violent coughs which spasm through his body, leaving his handkerchief stained with blood, are not enough to stop him wandering through the woods in search of the therapeutic herbs and fungi that he forages. Kim gets plenty of mileage from the arrestingly beautiful location, filming in several seasons. The pristine, graphic quality of the birch forest in the snow is replaced, over time with spring promise and summer fecundity.

It’s at this point that his son Min-sang, a solemn stranger with stick-thin legs, arrives by train at the nearest town to spend a few days with his father. They stare at each other with mutual incomprehension. But while few words are exchanged and there is no big, soul-baring, chest-beating emotional reckoning, there is a connection. Hee-tae stares at the boy as he sleeps, and then, almost fearfully, strokes his hair. For his part, Min-sang gradually gets over the trauma of the lack of phone reception and electricity, and starts to take in the serene beauty of the wilderness.

Sound design emphasises the kind of quiet in which every creak and crack is magnified into a dramatic event. Even so, and despite his dad’s ghost story of a herb gatherer who plummeted to his death while trying to reach a rare plant, Min-sang remains sanguine. A final breathtaking shot suggests that these few short days with Hee-tae have broadened the boy’s horizons forever.