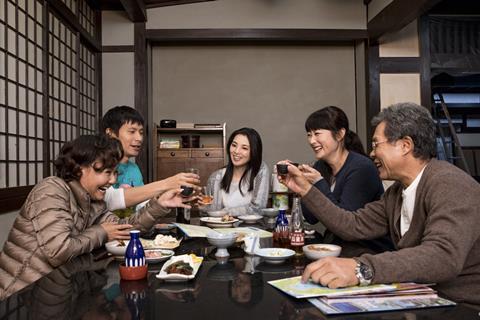 The amiable Omotenashi comes with an apt moniker: the Japanese term not just for hospitality, but for wholeheartedly striving to accommodate others. A blend of earnest drama, light comedy, workplace angst and yearning romance, the Kyoto-set effort endeavours to satisfy a broad audience with its tale of a struggling ryokan and the battle that arises over the inn’s future. From its picturesque lakeside imagery to its exploration of both generational and cultural clashes, the film’s quest to serve up something for everyone is evident in every good-natured frame — almost to a fault.

One of two titles opening this year’s Hong Kong International Film Festival, the other being Maren Hwang’s Xiao Mei, Omotenashi marks the theatrical feature debut of Taiwan-born, American-raised filmmaker Jay Chern, who previously directed Golden Horse Award-winning short Thief, well-received TV movies Dawn/Spring and Warmth, and worked on the camera crew for Studio Ghibli-focused documentary The Kingdom of Dreams and Madness. Here, he helms, co-writes with the latter’s director Mami Sunada, co-produces, shoots and edits, and the resulting Taiwan-Japan co-production likely to play best in its home markets. After premiering in Japan earlier this month, the film is set to bow in Taiwan in April.

The two countries are also weaved into the narrative — the feature’s Japanese leanings are instantly apparent, while its protagonist is the heir to a Taipei construction company. When Jacky (Wang Po-Chieh) arrives at the Blue Moon Ryokan on the banks of Lake Biwa, he possesses little appreciation for its rustic charms or the way of life it represents; a case of unfamiliarity breeding not so much contempt as apathy.

Desperate to succeed after a failed restaurant venture in New York, he’d rather renovate the hotel to lure in new buyers —  much to the dismay of innkeeper’s daughter Rika (Rena Tanaka). But, just as his father Charles (Yang Lieh) had good reason to buy the property, as he’s a family friend and ex-lover of Rika’s mother Mitsuko (Yo Kimiko), Jacky has his own motivations. Upon discovering his ex-girlfriend Naoko (Fujii Mina) is getting married, he decides to turn the inn into a wedding venue in the hopes of winning her back.

With the Blue Moon soon bustling with both activity and people, including manga-loving employee Bohao (Yao Chun-Yao) and his just-arrived mother Tiffany (Lu Hsueh-Feng), there’s no shortage of personal and professional conflicts. It’s Mitsuko’s suggestion that Jacky, Riko and Bohao take omotenashi lessons, however, that plunges the film into more ambitious territory. Gentle, affable humour ensues, as does a thoughtful depiction of trying to blend old and new ways. Indeed, a telling line makes plain the feature’s inspiration, if not its intentions; during a visit to another ryokan, Jacky remarks that its proprietor feels like a character from an Ozu movie.

They’re big footprints in which to tread, but Omotenashi mostly finds a balance between nodding to the Japanese master’s multigenerational family portraits and offering its own insights. Specifically, the film’s commentary on breaking down boundaries — between tradition and modernity, as well as between cultures — proves timely and astute.

Still, like much of the movie, it’s conveyed with a heavy hand. That description also applies to handsome shots of the eye-catching scenery, which come thick and fast; performances that never quite settle into a naturalistic rhythm, although they conjure up the right emotions; and to a sincere effort that’s a little too eager to deliver as many crowd-pleasing amenities as possible.