'Once Upon A Time... In Hollywood': Cannes Review 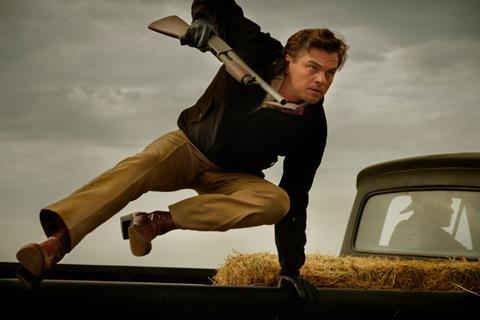 ‘Once Upon A Time In… Hollywood’

The fact that Once Upon A Time….in Hollywood concerns Sharon Tate (played by Margot Robbie) and the Manson Family is no secret. Its writer/director Quentin Tarantino would prefer audiences not to know exactly how; and he’s right, because that knowledge would greatly lessen the viewing experience of his ninth film. But, like a true bedtime story, Once Upon A Time… isn’t all about that one thing. There’s the scene-setting, the detours, getting lost, coming back, finding a happy ending. And, surprisingly, it’s mostly a love story – between two best friends (a fading TV star played by Leonardo DiCaprio and his stuntman Brad Pitt), and between Tarantino and the Los Angeles of his youth, which he wants to revisit and remould.

For Tarantino this is an almost soft-hearted – for him – film, although he cracks more than a few heads towards the end. It’s consistently funny, with terrific performances from Brad Pitt and Leonardo DiCaprio, and that gives it a potentially wider appeal than some of the director’s recent, fast-cut, ultra-violent work (although that, in itself, may disappoint hardcore fans). Criticisms can and will be made of Tarantino’s looseness; the vignettes he tells are all perfectly formed, but they’re long, some feel random and they can make the going seem a little flat. Having been delivered late to Cannes, this may even not be his final edit. But this is undoubtedly “independent” cinema’s commercial riposte to Marvel: big stars, big screen, big bucks.

In a cheerful double-act, Pitt and DiCaprio’s two best-buddy losers provide our entry into the TV and film world of the late 1960s. Both stars are fiercely enjoyable to watch here in their first pairing, with DiCaprio in full flight as an insecure boozehound actor who has seen better days and Pitt as his laconic former stunt double and current odd job man/driver who is nifty with his fists. Both characters get their own scene-setting flashbacks, and there’s an occasional humorous voiceover to move things along.

But make no mistake: Tarantino is not in a rush to finish this particular story, as DiCaprio’s chainsmoking Rick Dalton learns his lines on set for a Sam Wanamaker western, has meetings with a Hollywood agent (Al Pacino) who offers him work on Spaghetti westerns (the main Sergio Leone reference, despite the false promise of the title), and has repeated meltdowns over the fact that his TV success as the star of a bounty hunter show is well in the black-and-white past. (The crumbling of the star system and the rise of TV depicted here echo the seismic shifts that are happening in Hollywood today.)

Meanwhile, Pitt’s loyal sidekick Cliff Booth goes home to his trailer, feeds his dog rat-flavoured food, beats up Bruce Lee in a flashback sequence, and has an encounter with the hippy child Pussycat (a striking performance by Margaret Qualley) which leads him to Spahn’s movie ranch and an encounter with The Manson Family (an unexpected cameo from Lena Durham here).

The audience already knows this is where Tarantino is circling: by a stroke of good fortune, having invested in property during his heyday, Rick lives on Cielo Drive where he and Cliff witness the comings and goings of Sharon Tate and her new husband Roman Polanski (modern Hollywood stars, unlike the envious Rick). Tarantino also helpfully provides a sequence set in the Playboy Mansion where Tate and Polanski dance with Mama Cass and Michelle Phillips while Damian Lewis, as an amusingly unlikely Steve McQueen, explains their story and how Tate is still adored by her ex-fiance Jay Sebring (Emilie Hirsch). An extended sequence with Robbie’s Tate watching the real actress on screen in a cinema is a little puzzling, but gives the Australian actress something to do in a very male-centred film.

Once Upon A Time….in Hollywood is beautifully made. Beyond all the ‘Tarantino-esque’ touches of the action, the banter, the violence, the constant movie references, there’s a real craft underpinning the film which is of its own. You can see it in the close-ups – he goes in tight on his leading actors’ faces – and when he moves out to take a long shot of the ranch with the Family blocked out in an array of creepiness. There are tender sequences where the neon lights of Hollywood are switched on sequentially, there’s an ode to the craft of acting in a prolonged account of Rick’s attempts to get his lines right for Wanamaker. Even in the very opening scene, a mock-up of a Hollywood behind-the-scenes special, there’s real skill and humour.

Because it replays cinematic styles and revisits the long-gone world of the very small screen, there might be a tendency to dismiss Once Opon A Time….in Hollywood as pastiche. But this is more than that: it’s part of a love affair. A quarter of a century to the day since Quentin Tarantino premiered Pulp Fiction at Cannes, this is a smooth turn in a new direction for the film-maker. And the warmth is welcome.