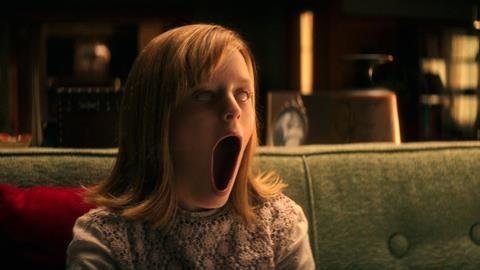 A prequel to Stiles White’s profitable mid-list ghost story Ouija (a Halloween release in 2014), Ouija Origin of Evil is a step closer to the mainstream for writer-director Mike Flanagan, who has impressed genre cognoscenti and critics with standalones Absentia, Oculus and Hush. Origin of Evil doesn’t stretch the conventions of teen-appeal spookiness too far, but is solidly put together, mounted with a pleasant conviction and runs to several fine performances and some decent scares. Given that the decidedly humdrum first film was a big enough hit to warrant a sequel, prospects for this superior follow-up are healthy.

In Ouija, contemporary teenagers unwisely used a ouija board in a haunted house and were pestered by the spirit of a little girl with her lips sewed shut.  Here, the story takes place in 1967, when little Doris Zander (Lulu Wilson) was a living moppet.  Doris and her older sister Lina (Annalise Basso, the standout player here) work behind the scenes at seances held by their widowed mother Alice (Elizabeth Reaser), who tries to make ends meet as a medium by proffering reassurance to the bereaved. When Lina and her schoolfriends use a ouija in a funny scene which allows Lina to expose sham spiritualism but still delivers a punchline jump scare, Alice is inspired to buy a board herself for use in her business.

With the novelty item, Doris is able to contact real ghosts in the Zanders’ surprisingly-haunted Los Angeles home, which include the Polish-speaking victims of a Nazi war criminal scientist who liked to take his subjects’ voices away by sewing their mouths shut.  Soon, Alice and Doris are hooked on a genuine line to the world beyond, but Lina – who calls in reasonable priest Father Tom (Henry Thomas, still fresh-faced decades on from E.T.) – comes to believe the former con-artists are now being rooked by malign forces posing as benevolent presences.

Like the Conjuring films, this has an understated period setting which allows for characters to be naïve about things horror audiences will recognise as instantly ominous. The Zander family set-up allows Flanagan to touch on serious issues of grief, sibling rivalry and addiction to alternative beliefs – and the frictions in the house of women make for uneasy drama even before the manifestations escalate to thrill-ride proportions.  There is enough background material here for a season of American Horror Story, and even the neat tying-together of the plots of both films – which extends to a post-credits tag featuring Lin Shaye reprising her role of the adult Lina Zander from Ouija – doesn’t exhaust mysteries which are likely to be explored in further sequels.

The series was developed by Hasbro, the company which has spun movie franchises out of their Transformers and GI Joe licenses.  As owners of the ouija trademark, they mount an admirably perverse exercise in counterintuitive product placement by perpetuating the belief that their merchandise is actively dangerous – though they still officially list the ouija board (under ‘toys for girls’) as ‘suitable for ages eight and up’.