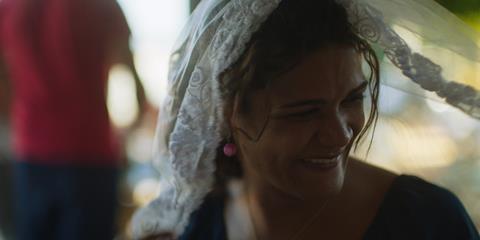 Inspired by a newspaper article, Brazil’s Marcelo Gomes has, together with actor Kika Sena, created a reverie on the dreams of a rural, black trans woman for full acceptance — which, for the titular Paloma (Sena), means a white wedding to her lover Ze (Ridson Reis) in a Catholic church, blessed by a priest. Paloma’s heedless determination to follow her desires is unlikely to end well, we know, but that’s almost beside the point of Gomes’s film: her courage and overwhelming vulnerability was palpable long before she started down that path.

Gomes’ (Joaquim) highly empathetic portrait lives and breathes through Kika Sena’s performance. Premiering at the Munich Film Festival, this Carnival Films production (sold through Memento) should clearly travel the LGBTQ circuit and could secure some distribution in niche theatrical play. The seeming inevitability of the narrative is leavened by Sena’s acute construction and portrayal of the character of Paloma. Brazil’s trans community may seem more accepted or even established than others, but, as is often the case, it’s paper thin, and deaths are commonplace. Paloma’s grip on her life is tenuous.

Gomes doesn’t delve into Paloma’s history: there’s no background for who she is or where she comes from. We start with her enjoying lustful sex with Ze, her husband and, in a reverse Crying Game, the camera pans back in the shower to show her full body, and naked penis, before anyone can say a word. This is who she is. Sex is a big part of Paloma’s life, but ‘normality’ is what she really craves. With Ze, she co-parents a seven-year-old daughter, does hair part-time and works as a fruit picker in a papaya plantation to help Ze achieve his own dreams – a fairly mundane desire for an expensive motorbike.

Paloma is poor, black, and uneducated; she is, in fact, illiterate. As the film pans back into her life, we see her friends (working at a sex parlour) and get the sense that she has left a lot behind to pursue Ze and her dreams of the full package, including a white wedding. Yet this shedding of her support network for ‘normality’ is a risky move. Casual jibes and threats accompany her wherever she goes, and Sena’s portrayal conveys the sweetness and innocence of her nature and the vulnerability that accompanies it.

Paloma’s goal is not as unreasonable as it initially seems. Trans communities – even straight ones – may justifiably ask why she would even want to take this heteronormative path, and find it unsympathetic, at least at the outset. Same sex marriages are legal in Brazil, but religious acceptance is as remote a possibility here as it is anywhere else. Yet this is her dream. This is what she sees as sealing her place in the community. Brazil’s broad church of spirituality means her quest isn’t as doomed as it might initially seem, but it becomes increasingly clear that it’s going to cost her in ways she doesn’t anticipate.

Gomes shoots his classic portrait of a doomed heroine emphasising light and shadow. There’s a tropical feel, but it isn’t fetishised. The white of Paloma’s dream wedding contrasts with the occluded life she is permitted to live, where stepping out of the shadows is a confrontational act for Brazil’s uneasy status quo. In the way of classic femme films, though, Paloma belongs to Sena, who has created A Fantastic Woman in her own sweet, provincial way.