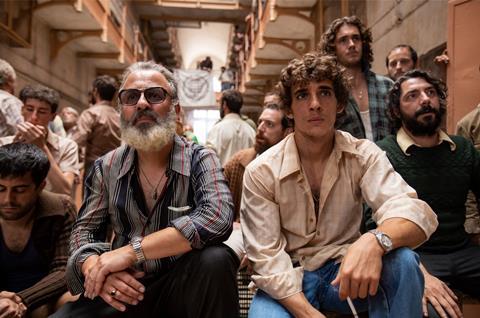 A tough Spanish prison drama becomes a venting of rage at the past in Prison 77 from Alberto Rodriguez, the director and co-writer of 7 Virgins and Group 7. The Seville native also made the disturbing policier Marshland (2014) and there are similarities here in capturing a country trying to take faltering steps towards democracy after the death of Francisco Franco in late 1975. The story of brutally-abused prison inmates making a stand for amnesty at the end of a regime which incarcerated the people it didn’t like – anyone from communists to homosexuals – and threw away the keys, Prisoner 77 has a feeling of Hunger in its depiction of horrible injustice, although it’s more conventional jailhouse film-making in other aspects.

Opening the 70th San Sebastian in a numerological orgy of 7s, Prison 77 will have a strong resonance in Spain, where it goes out through BVI on September 23, as the country continues to directly confront its recent past. Scenes of brutality and miscarriages of justice in a system which has been rigged by the ruling elite in a miserable police state provide both drama and emotion. International audiences hoping for a Cell 211 will have to recalibrate; there’s less suspense here, and the political nuance may not travel so well. Working again with DoP Alex Catalan, though, Rodriguez pulls off the unexpected feat of making this caged drama visually impressive — Barcelona’s Modelo prison, closed in 2017 and now a historical landmark, is a locations gift that the production is happy to keep unwrapping.

It’s a given that a prison drama will eventually hone in on a couple of cellmates, but Rodriguez takes his time to introduce his leading character first. The stubborn, proud young accountant Manuel (a wide-eyed Miguel Herran, from TV’s Money Heist) has been dumped in Modelo after an allegation of fraud by his boss and there’s no hope of an immediate trial. From the start, Manuel refuses to bow down to the ‘blisters’ – the prison guards who run this giant prison with their batons. He holds onto his fancy wide-lapelled suit, even though it costs him a mattress for his first two weeks of obligatory ‘sanitation’ isolation where he’s ravaged by insects, develops an abscess and makes his first formal complaint, marking him out for even more brutal treatment.

It’s just a small sign of what’s to come, and conditions will get worse as the guards try to break his spirit. With a four-year wait for even a trial, Manuel’s only visitor – and the film’s only woman – is Lucia (Catalina Sopelana), the sister of his ex-girlfriend. It’s his only offer of friendship in the world, yet he pridefully turns her down. He’s not going to give into the guards either, although his continued defiance will be akin to self-sabotage. Manuel is eventually delivered to his cell, via the ill-fated factotum El Negro (Jesus Carroza) and the shut-down lifer Pino (a reliably gruff Javier Gutierrez, who also starred in Marshland).

Manuel, a firebrand, decides to join the nascent Prisoners’ Rights Association, while Pino looks on sceptically from his science fiction books and jaded position of security. A death and punishment beatings carried out with impunity will eventually rouse Pino into supporting his cell-mate, as the prisons riot and the power structure twists and turn on itself.

‘Inspired by’ real-life events, as post-film credits and photographs illustrate, Prison 77 starts out in 1976, some months after Franco’s death, and ends in 1978, with hope that is hard come-by. The striking camera-work – the recreation of a roof protest being a highlight – and fantastic costuming (Pino is, we are told, a ‘dandy’) can only hold the eye for so long as beating follows beating and the prisoners’ hopes are ruthlessly crushed. It’s up to the final 20 minutes of a near two-hour running time to deliver on the long-withheld promise of suspense. There is a future, the film seems to say, but you literally have to carve it out for yourself.

A recurring image, seen from the cell window, is a bright neon sign urging its readers to ’jump into colour’;  it may be a little on the nose, this ad for TV sets, but it does encapsulate Rodriguez’s vision of a Spain trying to push its way forward, into the light.