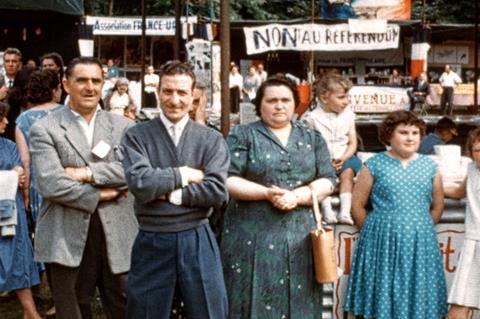 Returning To Reims (Retour a Reims (Fragments)) constructs a fascinating reflection on working class life in France over the past 70 years. Loosely adapted from Didier Eribon’s 2009 memoir, Jean-Gabriel Periot’s documentary matches a mosaic of archive footage with one family history to vividly evoke shifting currents in the political life of the nation. An emotional, thought-provoking work, it  should attract politically engaged audiences in France, where Jour2Fete will distribute, and extensive festival interest internationally.

Densely packed with ideas and images

Eribon’s book told of his return to the hometown he had abandoned thirty years earlier. The death of his father was a catalyst to reconnect with his mother. Exploring the family history through fresh eyes allowed him to confront issues of identity, politics and his shame at being working-class.

Returning To Reims retains the essence of Eribon’s work whilst discarding some of the more personal elements, including his homosexuality and conflicts with his homophobic father. Instead, Adele Hanel narrates the story of a prodigal child returning home and a reconciliation that prompts discussion of a mother’s life, marriage and the opportunities she never had.

Told in two movements and an epilogue, Returning To Reims uses shrewdly chosen clips from films, documentaries and television news reports to illustrate its story. The excerpts range from work by Jean Vigo and Jean Renoir via Godard to Jean Rouch, Pialat and Coline Serreau.The story of a typical working-class family constantly reveals wider truths. The “ Fragments” become like a list of accusations, as Periot considers the role of education, housing, health care and the grind of a factory assembly line in an inflexible social order designed to keep everyone in their place.

Children finish school as young as 13 and then work themselves into an early grave to provide a decent life for their family. We hear of a 36 year-old woman who has had 20 abortions. A cleaner who cannot read or write. Social housing described as “ concentration camps by instalment.” A teenage girl expected to carry sacks of potatoes weighing 25kg. There is a melancholy refrain throughout of what might have been, of the paths untravelled but also a weary resignation that this is just the ways things are. Women accept that they are living in a man’s world. One man in a pub is asked why he chooses to socialise with his male friends and where his wife might be that evening. He replies: “ The wife stays at home cleaning. It’s not our job.”

The first movement of Returning To Reims is a journey towards a deeper reading of the social history of the 1950s, 1960s and beyond.  The narrator is able to understand the forces that shaped the parents and perhaps gain more sympathy for them. The second movement becomes more acutely political, as Periot traces the way in which a white working class vote has shifted from instinctively supporting the left to backing the National Front. He details the rise of racism, and the way that racism became a means for the white working class to feel superior to those who were even worse off than them.

Densely packed with ideas and images, Returning To Reims has a ready appeal to those on the left but the human elements and the personal stories should allow it to reach further. Rather than mourning the futility of seeking change, Periot ends with a rousing rallying cry for the left and an assertion that the rise of strikes and protests (including the gilets jaunes) signals a resurgence of people power in France.