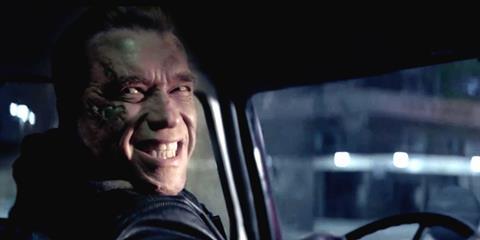 The dark, unknowable spectre of the future haunted the original Terminator, but as this man-versus-machine franchise hits 30 years of age, time itself is proving to be the series’ greatest foe. Terminator Genisys is a reasonably entertaining and niftily executed sci-fi action-thriller, and yet its ingenuity and craftsmanship are all in service of justifying its existence, resulting in a sequel that can be appreciated for its cleverness but otherwise regarded with a certain amount of ambivalence.

Opening in a few territories in late June before landing in the US on July 1 and the UK the following day, this Paramount offering is the first Terminator film since 2009’s Terminator Salvation — and the first to prominently feature Schwarzenegger since 2003’s Terminator 3: Rise Of The Machines. Arnold’s most potent franchise will need his star power, but considering his reduced commercial appeal since the end of his governorship of California in 2011, that alone may not elevate Genisys to global riches. Still, with a cast that includes medium-profile names like Jai Courtney, Emilia Clarke, Jason Clarke and J.K. Simmons, this fifth instalment should cater to action fans and nostalgic Terminator junkies alike.

Starting in 2029 before jumping back to 1984 and then leapfrogging ahead to 2017, Terminator Genisys introduces us anew to Kyle Reese (Courtney), the brave soldier in the human resistance who was sent back in time by team leader John Connor (Jason Clarke) to stop a ruthless robot assassin from killing his mother Sarah (Emilia Clarke) before she gives birth to him.

That was the setup for Cameron’s 1984 original, but Genisys throws an unexpected twist at us: just as Reese is sent back from 2029 to 1984, Connor is attacked by a Terminator (Matthew Smith), warping the familiar timeline. Reese ostensibly lands in the 1984 of the first Terminator, but significant aspects of that story have changed. Now, Sarah is already a fearsome warrior who has spent a good portion of her life fighting Terminators, and her loyal robot protector, known as the Guardian (Schwarzenegger), looks like the T-800 of the ’84 film but has been watching over her since childhood.

Much like the recently rebooted Star Trek, Genisys enjoys messing with its franchise’s lore, introducing a new timeline that sometimes offers variations on established parts and occasionally echoes memorable moments in fresh ways. (For instance, it’s now Sarah who intones, “Come with me if you want to live.”)

Not since Back To The Future II audaciously set its story partly within the confines of its first instalment has a sequel so shoehorned its narrative inside pre-existing material. A working knowledge of The Terminator and Terminator 2: Judgment Day, the two films made by Cameron, will go a long way towards appreciating what Taylor (Thor: The Dark World) very nearly pulls off in Genisys, which is to tweak our understanding of the franchise’s major characters, have a chuckle at its insolence and deliver a gripping Terminator movie in its own right. The lethal, mercury-like T-1000 (this time played by Byung-hun Lee) is back, but so is the very ‘80s-blockbuster belief that lame one-liners and dopey catchphrases uttered while blowing away baddies never go out of style.

Upon reflection, the explanations given regarding the new film’s distorted timeline — why characters can remember two separate pasts, why events in one reality can or can’t be repeated in another — probably won’t hold up to close scrutiny. But that matters less if Genisys can build up enough of a head of steam to smash through such quibbles. On that measure, the film’s success rate is about 50-50: Here’s a sequel in which characters spend so much time discussing the narrative’s internal logic, but only rarely are the explanations entertaining in and of themselves. Instead, the expository dialogue feels like a stopgap measure, an excuse to rationalise the fact that there’s yet another Terminator sequel while pushing us along to the next action set piece.

This obviousness isn’t so objectionable, however, considering how superb several of the film’s major sequences are. Assisted by editor Roger Barton and cinematographer Kramer Morgenthau, Taylor gives Genisys a sufficient amount of grandeur and propulsion. By now, it’s hardly newsworthy to note that in Genisys the fate of humanity hangs in the balance — that’s always been the case with this series — but Taylor and his collaborators do a good job dreaming up gripping scenes, including one involving a school bus dangling over the edge of a bridge. Anyone going to Genisys will know what to expect from a T-1000, but the filmmakers find novel new ways to suggest its unstoppable menace, which is helped by Lee’s sly, villainous performance.

But those comforting, familiar pleasures are undercut by a script that is nimbler in its logistics than in its treatment of its characters. Best known from her work on TV’s Game Of Thrones (a show on which Taylor has served as a director), Emilia Clarke can’t quite capture Sarah’s bruising, haunted quality, a combination of brawn and vulnerability that came effortlessly to the role’s original portrayer, Linda Hamilton. Instead, we get a simplistic Sarah who’s a wisecracking, gun-toting smartass.

This tendency toward one-dimensional characterisations affects most of the film’s main protagonists, whether it’s Schwarzenegger’s intentionally robotic turn as the Guardian or Courtney’s Reese, who is neither compelling nor appealing enough to be an empathetic reluctant hero. (Jason Clarke’s job is merely to be ruggedly inspiring, although he does have a bit of fun with one of the surprises created by this new timeline. And Simmons, fresh off his Oscar win for Whiplash, returns to the sort of thankless supporting work, as a detective chasing these time-travellers, that is the bread and butter of so many character actors.) As for Courtney and Emilia Clarke’s flirty/combative rapport, very few sparks develop, even though we (and some of the other characters) know that Sarah and Reese are destined to fall in love and give birth to John Connor, humanity’s last hope against its robot oppressors.

Still, give credit to an impressive effects team, which does wonders with the T-1000’s liquid metal. Additionally, utilising a similar technique used in Tron: Legacy for Jeff Bridges, Genisys impressively incorporates digital airbrushing to transform Arnold back to his mid-‘80s appearance during a brief segment.

Indeed, Genisys never lacks for forward momentum or precision action filmmaking. But the movie’s greatest attraction remains Schwarzenegger. It’s both inventive and a little desperate that the filmmakers have figured out how to include the 67-year-old actor as the still-imposing android by explaining that the character’s human casing ages even though the robot inside doesn’t. Schwarzenegger is still right at home as the stiff metal man, but the grey in his hair and the wrinkles on his face provoke an undeniable poignancy, acknowledging that no machine (or franchise or Hollywood star) is indestructible.