‘The Beatles: Get Back’: TV Review 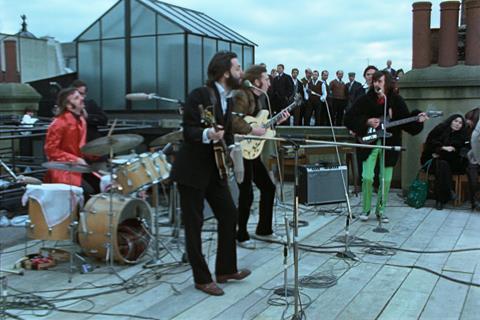 It’s rare to gasp in the first few moments of any film, let alone a close-to-eight-hour marathon reworking of footage from January 1969: The Beatles: Get Back is a long haul, and the ending is sad, so best to keep a grip on those emotions. Beatles-fan or Beatles-bored is immaterial, though, when the viewer enters the empty studio at Twickenham in Peter Jackson’s miraculously cleaned-up edit of Michael Lindsay-Hogg’s 60 hours of 16mm footage of The Fab Four’s ‘Get Back’ sessions. It’s so crisp, so vivid, so real. The Beatles as people have been lost in time to iconography which has rendered them almost meaningless, separated from the music, like the bewigged Mozart who stalks Vienna streets on tourist posters. The likely Liverpool lads in their mop tops, John’s glasses, the Sgt. Pepper pop art. Yet here they are.

That surprise, of seeing them sit so close together, still so young - John Lennon 28, Paul McCartney still only 26 -  and of the camera being so intimate that the viewer is included in this vivid tableaux, delivers an initial jolt of excitement which beds in, yet lingers like a top-note. The 1970 film Let It Be was hacked together from this footage after the band had disintegrated in rancour, yet fielded nothing that would lead audiences to expect Jackson to deliver such a powerful love story.

Initially intended as a film, this release of ‘lost’ footage from the Apple Corps vaults to Jackson and his technical wizards at Wingnut has ultimately spread its wings to 468 minutes released over three nights on Disney+. The result is a lot of musical noodling and cups of tea and cigarettes and waiting around while Glyn Johns gets the levels right or John Lennon gets out of bed or Mal Evans drags an amp in the room (the 60 hours of film shot over 30 days is augmented by 150 hours of audio recording, so sound and image don’t always match). But if audiences – fans or not – ever dreamed of an immersive experience at a crucial cultural moment, of being part of the Beatles as they made music, here it is. The songs pour out of them in front of the camera. The climax is extraordinary, when the struggle of perfecting ‘Get Back’ and ‘Don’t Let Me Down’ culminates in the last live performance the band will ever make on the rooftop of Apple HQ in Savile Row on January 30, 1969.

Surviving Beatles McCartney and Ringo Starr, together with Yoko Ono Lennon and Olivia Harrison, are producers of Jackson’s film. Beatles historians will pick it over – Jackson says he insisted on viewing and listening to all the material and this is an accurate reflection of events, but these particular producers have been very keen on control which they lacked during the time captured here. What’s clear is that, contrary to perception, the Beatles were not broken during these sessions — they were breaking apart, certainly, and watching it happen adds to the sadness (John and Yoko’s meeting with Allen Klein sounds the death knell offstage).

These are strong-minded musicians who clearly need to go their separate ways, and they’re struggling to work together, because they love each other and don’t want to break up and, also, they make wonderful music together which still excites them. Yoko is in the room, and while the dynamic between her and John is odd, it doesn’t stop the music – in fact, they all bizarrely act as if she isn’t there, including John, whose moods vary wildly and can seem drug-related. Two Hare Krishnas sit silently chanting in a corner. Linda McCartney (or Eastman) comes in every now and again, taking photos, later bringing her daughter Heather, who proves far more of a distraction than Yoko. An insecure George Harrison, writing every night but fed up – particularly with McCartney – walks out and has to be persuaded back in by the promise of a move to a proper studio and the nixing of any idea of a tour or live show.

The precise springboard for all this is not clear. Why are they rehearsing on a horrible sound stage? The Beatles had struggled together during the recording of the White Album the previous year, and this ‘project’ they are working on is so ill-defined – a TV special, a film, a performance, perhaps in Libya, even though none of them wants to travel and only McCartney really cares for performing live again. What persuaded the Beatles to allow Lindsay-Hogg such incredibly close access, even as they are struggling as a band together? Apart from a brief run-through of the history of The Beatles at the start of the first episode, Jackson eschews wider contextualisation – although the films are very musically clear and stamped with credits.

The band liked Lindsay-Hogg, certainly, and he cuts an odd, suited figure in their loose-lipped, funkily-dressed camaraderie. But they were rudderless. Time and time again Paul McCartney bemoans the loss of their manager Brian Epstein, looking for a father figure to tell them what to do, so he steps in, to bristling effect. They’ve set up Apple Corps as a holding company but seemingly have no control over it: they’re on an impossible recording timetable due to the fact that Apple will shoot a film starring Ringo at the end of the month… but they own Apple. The basement studio at Apple Corps in Savile Row isn’t fit for purpose when they move in. So the pressures they bemoan and are keenly aware of – in particular Paul and George – are of a coiled management mess that’s snakier than the nest of wires on the floor. They’re all scarred to a certain extent by Beatlemania and perhaps, in George’s case, suffering from some sort of PTSD. It’s no wonder they broke up and the question is more of how they managed to stay together for so long. The answer, poignantly, is love.

Lindsay-Hogg’s constantly-running camera can appear as rudderless as the band at times. “I don’t know what I’m making any more,” he says. “You’re telling the autobiography of the Beatles, aren’t you?” says an unidentified Beatle, possibly Lennon. His skill, though, is apparent in how he gets them onto the rooftop — it takes some persuasion for an insecure Harrison to perform publicly in any way - and shoots them once he’s there. Jackson’s beautiful clean-up and generous edit of Lindsay-Hogg’s footage is like the continuation of a conversation, rather than a new film of a film within a film.

The Beatles have been incapacitated by their success, that much is clear, and they’re looking for answers individually even if they don’t want to lose the friendship that is so palpably close. They talk endlessly about Hamburg and the Cavern with fond nostalgia. They have the same sense of humour, share the same joy and wonder in their collaboration: they’re a unit. ‘We have to sit down becaus we get too excited,” says John after one song. He sings an early rendition of ‘Jealous Guy’ (called ‘Road to Marrakech’). Between songs like that, ‘Two Of Us’, ‘Don’t Let Me Down’, “it’s like you and me are lovers” jokes Lennon to McCartney.

Get Back shows how much The Beatles did really, really love each other, and when they were chewed up, spat out, and fell apart in the months following this film, why the world mourned – the essential part of their story that has been lost to time and and tragedy, and the reason why this long documentary is so cumulatively moving.