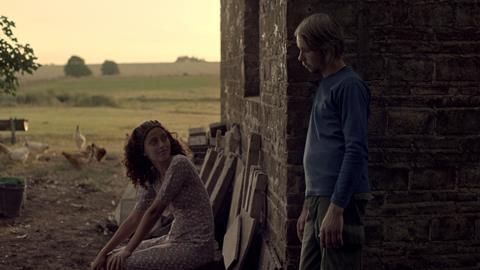 The Black Frost (La Helada Negra) sounds like the title of a horror film. And it is, if your horror is the mystery of sainthood. Maximiliano Schonfeld’s second feature is the portrait of a sacred and seductive character who seems to bring miracles to a remote farm at the brink of crisis.

Much rumbles under the surface, leaving the audience guessing.

Straddling the borderline of the sacred and the secret, The Black Frost sits deep in its rural atmosphere and its ambiguity. This measured story may not go much past festivals and arthouses in the US and Europe, but the mysterious and deeply watchable Ailin Salas in the lead should get the film plenty of attention.

Schonfeld opens his peculiar parable about belief with a dark purplish blot on the screen, which hardens into something more distinct. In the horror vocabulary, it could be a pernicious virus under a microscope, leading you into a spiral of terrifying symptoms. Here it’s a curtain that lifts to reveal an isolated family farm that’s fallen victim to a frost which is killing everything.

Members of the immigrant family which operates the farm are as blonde as Scots or Swedes, and barely monosyllabic. Into their midst comes the dark-haired Alejandra (Salas), whom they feed, clothe and treat hospitably. Soon the crops recover. Is the family being rewarded for its decency, or is Alejandra a blessed presence?

It’s a mystery throughout, with a hint or two that doesn’t take you very far. The family’s paterfamilias, the white-bearded Benigno (Benigno Lell), and the farm-boyish Lucas (Lucas Schell), both have eyes for young Alejandra. The tension here, once the black frost ceases to destroy their livelihood, rests on whether the miraculous will ever reveal its own malevolence. Anyone raised in mainstream film culture will wonder whether the farmers are superstitious enough to torch their savior as a witch.

Whether characters are burning frost-ravaged vegetables or pulling a wagon of sleeping dogs by tractor, Schonfeld makes the audience feel the hardscrabble dirt on which they stand. Sometimes The Black Frost seems like a fly on the wall documentary about farm life in a distant place that hasn’t changed for decades, complete with ethnographic flourishes like dances in costume from the old country. Schonfeld’s earlier feature, Germania (2013), sought the same tactile rootedness in its setting in the Entre Rios valley.

The dramatic feel, however, is the ominous listlessness reminiscent of Carlos Reygadas’s Silent Night or Carl Theodore Dreyer’s Ordet (The Word), or the foreboding of Michael Haneke’s The White Ribbon, advancing in small steps of visual exactitude.  Scenes at night with drunken farmers dancing and clapping to a single accordion echo Bela Tarr.

The Black Frost isn’t a silent film, but it might as well be (which won’t hurt its range), as DP Soledad Rodriguez sits on long observations of everyday chores, always with the sounds of animals, cutting away to close-ups of the farmers and their daughters whose anxieties are heightened by the presence of an attractive woman who seems to hold their fate in her hands.

Sometimes Schonfeld overdoes it, with his odd purple swirl book-ending the film that seems a Terence Mallick affectation. But most of the time he engages you with The Black Frost as much as his characters are engaged with the enigma of the person who saves them from a plague.