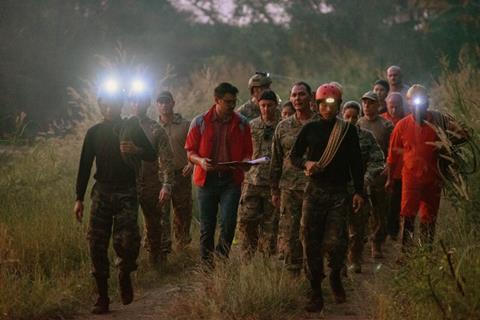 Fifteen months after 12 boys and their football coach were rescued from Tham Luang cave in northern Thailand, the first dramatisation of the event premieres at Busan. Enlisting many of the real people who participated in the operation to appear as themselves, this no-frills account focuses on the rescue attempt rather than developing the children and their families into characters in the story. Although not entirely the filmmaker’s fault as the boys’ life rights were locked up almost as soon as they emerged safely from the cave, this ends up being a key omission. The fact that we already know the happy outcome of the incident is not the only reason that this film lacks tension.

In condensing the rescue into a feature script, Waller faced a challenge which, while not quite on the same scale as the rescue operation itself, is certainly a logistical headache. Ongoing fascination with the rescue should ensure some interest in the film, particularly in Thailand, but the scope of the story might be better suited to the Netflix miniseries which is currently in development.

Written, directed and produced by Bangkok-born Thai-Irish filmmaker Tom Waller, The Cave suffers from the same issue which plagued Clint Eastwood’s The 15:17 To Paris – that casting real people as themselves in a dramatic reconstruction is no guarantee of the kind of performances which drive a film. Add to this the fact that it was a hugely complex international operation with numerous moving parts which are difficult to wrangle into a feature-length production, and the issues which plague the film are quickly apparent.

The initial set-up of the story is brisk almost to the point of being cursory. The boys and their coach kick a ball for a couple of shots and then climb on their bikes for their cave excursion. The first hint of their plight comes from a ranger who spots the boys’ bikes and shoes left by the mouth of the cave as a sudden downpour floods the underground system.

We get a glimpse of the children struggling to a place of safety through the rapid, churning water, but the focus is predominantly on the action above ground. Even so, we don’t get to meet the children’s relatives until a brief scene at the very end of the picture; a curious decision which hampers the picture’s emotional impact. Indeed, the film devotes more time to the manufacturer of high spec water pumps whose attempts to help are repeatedly thwarted by a maze of bureaucracy every bit as labyrinthine as the cave system.

Irish cave diver Jim Warny is one of several members of the rescue team who play themselves, and the only person in film who gets anything in the way of a backstory; he lost a close friend in a cave diving accident, a bereavement which is clearly still raw. Also playing themselves are a rice farmer who donated her compensation for crops ruined by the rescue back to the government to support the operation; a Chinese cave diving instructor, and divers from Finland and Canada, among others.

While casting real participants in the film brings a weight and authenticity, it becomes clear that the kind of calm, level-headed individual who excels at cave diving doesn’t tend to be given to the displays of emotion which could be shaped into an acting performance. To counter some of the dramatic inertia, Waller employs an overstated score which brings its own set of problems. Like the cave rescue itself, the film isn’t the disaster it easily could have been. But it’s far from achieving an equivalent triumph.