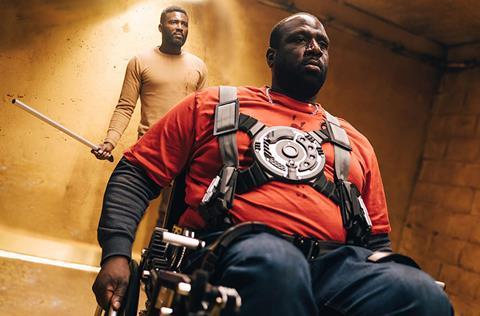 For his second feature, French Burkinabe actor-writer-director Cedric Ido blends gritty realism with fantastical elements to create a landscape both familiar and otherworldly. As two rival drugs gangs struggle for power on a housing estate in the Paris suburbs, above their heads the aligning of the planets is playing havoc with gravity. And while Ido keeps this sci-fi scenario in the background for the majority of his film, it’s just enough to bring a fresh twist to the French suburban social drama.

Despite the geographically and culturally specific setting, the gritty banlieue will now be recognisable to audiences thanks to films like La Haine, Girlhood and the recent Athena — all of which take place, like The Gravity, in the dog-eat-dog environs of a disadvantaged French estate. This familiarity, along with its attention-grabbing premise, could help the film travel outside of France, where it releases in December following a festival run which began with a Toronto Platform premiere and has taken in the likes of Stockholm and Red Sea.

Fittingly, the film begins with falling; an arresting sequence in which the camera follows two young boys as they descend through the air in slow-motion. They have, it transpires, plummeted off the roof of one of the estate’s tower blocks; the impact results in the death of one of the boys, and life in a wheelchair for the other.

This idea of individuals bound together by fate, of lives hanging in the balance, fuels this narrative which, after that initial flashback, jumps forward over 20 years. Those boys, now men, are still on the estate. Joseph (Steve Tientcheu) deals drugs from his kitted-out wheelchair. His athlete brother Daniel (Max Gomis, whose sympathetic performance has seen him shortlisted for this year’s Cesar Revalations Rising Stars Award) is secretly planning a move to Canada. And Christophe (Jean-Baptiste Anoumon), whose brother died in the accident, has returned from prison to get the justice he feels he deserves.

While the same concrete towers may loom over the estate, down below things are different. A young gang, called the Ronin (’samurais with no masters’) now run the streets. But while their business methods are different — having no leader, for example, keeps loyalties strong — and they say they want to invest in the community, they still engage in the same tactics of exploiting the desperate, of intimidation and control. As the sky slowly changes to red, tensions between the old guard and the new kids on the block reach boiling point.

Ido, who previous co-directed 2017’s comedy Chateau with Modi Barry, keeps his focus firmly on the ground. Aside from snatches of news bulletins, and a few genuinely stunning CGI shots of the planets in space, it’s as if this seismic event isn’t worth a deeper look — which, for the film’s protagonists, it genuinely isn’t. But while they may be too caught up in their own hellish problems to be gazing up at the heavens, the film does nevertheless feels a little unbalanced; the planetary backdrop more successful as a metaphor than as a propulsive dramatic device.

Nevertheless, as the planets finally align and the Ronin sees this celestial event of something of a prophecy, the two narrative strands finally knit together in a bombastic climax (which includes a truly inspired use of wheelchair as weapon). As all hell finally breaks loose in the sickly yellow bowels of the tower block — a neat contrast to the airy, perilous heights of the film’s opening — the action is, as with the rest of the film, underscored by commited performances, fluid camerawork from David Ungaro and the urgency of Evgueni Galperine and Sacha Galperine’s standout electronic score.