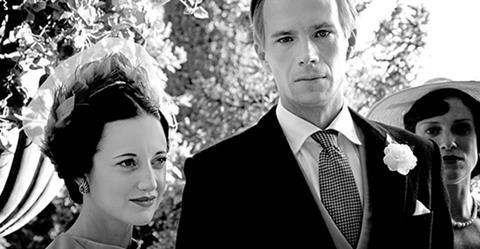 Madonna heads back behind the camera for W.E., an elegantly woven story linking a modern New Yorker’s desire for true love with the passionate relationship between American Wallis Simpson and King Edward VIII. It is a beautifully staged film punctuated with nuggets of charm and style and dominated by a majestic performance by rising star Andrea Riseborough as Wallis.

It is a beautiful film and often a real visual treat.

Riseborough – a bewitching English actress who has been threatening to grasp stardom for a few years now – is quite brilliant as the chic American Mrs Wallis Simpson who entranced the British King in the 1930s. In a film that is perhaps to busy and overly multi-layered for its own good, she is the charismatic core and helps give it an energy lacking from the other parts of the story. The film had its world premiere at the Venice Film Festival.

W.E. may be a tough sell to those unaware of that famous love affair, and though the relationship was naturally touched upon in The King’s Speech, this film does not have that film’s easy appeal for older audiences looking for more Royal romance. Instead Madonna aims high as she seeks to tackle love, celebrity, fame, abuse and disappointment, often hitting her targets – and sometimes not – but always offering up images that are beautifully shot and staged.

By all accounts, Madonna has been intrigued with the story of the Duke and Duchess of Windsor (as they became known after he abdicated and married Wallis), and by viewing that relationship with the fictional story of Wally Winthorp (Abbie Cornish), a young woman obsessed with the story and seeking to find a love as apparently strong as theirs, she attempts to offer up a more rounded (and certainly unconventional, given that at one stage Wallis dances along to the Sex Pistol’s song ‘Pretty Vacant’) presentation of the story of Mrs Wallis Simpson.

It is 1988, and stylish and elegant Wally Winthorp (Australian actress Cornish sporting dark black hair to heighten her association to Wallis) is caught in an empty marriage with doctor William (Richard Coyle, dressed to look very 1950s) and seeks escape in constant visits to Sothebys auction house in New York – where she used to work – which is displaying items from the estate of the Duke and Duchess of Windsor prior to an auction.

She finds herself increasingly transfixed by these artifacts from the Windsors’ lives – whether it be clothes, furniture, jewelry or images – and clings to their appearance of the perfect love affair as way of hoping that her relationship will work. When her husband turns abusive she turns to hunky Russian security guard – who happens to work at Sothebys and takes a shine to her – who offers her compassion and affection.

Her story is set alongside that of Wallis and King Edward VIII (James D’Arcy in an impressive performance) – or David as he lets his close friends call him – briefly dwelling on Wallis’s first marriage (to an abusive man) before detailing the moment she first met the soon-to-be King while still married to her second husband.

Wallis is a strong and charismatic woman – also great at dancing, a beautiful dresser and mixer of top-notch cocktails – who wins over David with her wit, charm and forthright nature. In this peach of a role Andrea Riseborough is sheer perfection – not only does she look a lot like the real Wallis, but she elegantly combines ambition, compassion, humour and fear as Wallis finds herself on a rollercoaster ride as parts of English society take against her when he abdicates and they are forced to live overseas.

Naturally much will be read into Madonna’s fascination with a woman harassed by the press and forced to make many sacrifices, though at its heart W.E. is about the search for true love.

The device of having the two stories works pretty well in the first half of the film, but as the Wally story heads off into melodrama territory things do get clumsy at times and the final section that sees Wally head off to Paris to try and get to read Wallis’s private correspondence only bogs down the story rather than aid it to its natural conclusion. It is a device for Wally to learn that Wallis was never as happy and content as she had imagined, but it would have perhaps been better integrated in a different fashion.

The Paris side trip sees Wally head to a meeting with former Harrods chief Mohammed Al Fayed, who owned the letters. For one terrifying moment I thought we might get a cameo from Al Fayed himself, but instead he is played by Haluk Bilginer.

Abbie Cornish has perhaps the hardest role. Her Wally (unfortunate name) is elegant and beautiful (and spends a good deal of time in her best slinky underwear trying to entrance her hubby) but is given little to say and flies close to being bland when she should be intriguing. Cornish can do sad and soulful extremely well, but much of the film features scenes of her wandering around wistfully prior to another flashback dwelling on Wallis and Edward.

Where Madonna does get it spot-on is in terms of costume, style and production design. It is a beautiful film and often a real visual treat. She also can’t resist a few unusual musical moments that help give the film a needed sense of quirkiness and drive. W.E. is a film will have its detractors – but Madonna is used to criticism – and while certainly not perfect (and could easily be trimmed) it does have delightful and memorable moments…and best of all in Andrea Riseborough it has a remarkable and mesmerising central performance.