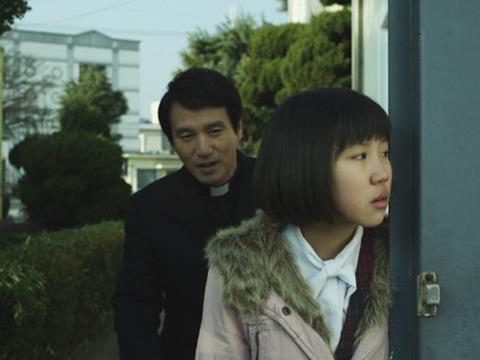 Mirroring the themes of religion, grief and forgiveness found in Lee Chang-dong’s Secret Sunshine (2007), El Condor Pasa is a compelling addition to Jeon Soo-ill’s body of work, which should continue its festival run following its world premiere in Busan, but lacks the substance found in Lee’s award-winning feature.

El Condor Pasa attempts to explore whether religion can aid in forgiveness, or merely becomes a fruitless endeavour.

Jeon Soo-il is no stranger to the festival circuit, and has built a reputation for his realist form of filmmaking and El Condor Paso is emblematic of this style through a number of long takes and minimal interference.

Most of the film takes place in Busan where Jeon has established his roots as it follows a catholic priest who begins a relationship with a woman after her younger sister is raped and murdered. The priest then takes a trip to Peru to visit an old friend as he sets out toss seek forgiveness for his transgressions.

Unlike Lee’s film, its shorter duration and less grueling narrative makes it a generally more tolerable feature, but Jeon’s typical austere approach makes a number of scenes including an overly drawn-out sex scene an uncomfortable viewing.

With faith and forgiveness becoming a tangible theme in a number of Korean films including A Reason to Live (2011), much like Lee’s Secret Sunshine, El Condor Pasa attempts to explore whether religion can aid in forgiveness, or merely becomes a fruitless endeavour, but Lee’s film is more successful in this regard owing to a stronger script and an exceptional performance by Jeon Do-yeon.

Nevertheless, both leads in this film: Cho Jae-hyun and Bae Jeong-hwa are able to deal with the demands of their respective characters and deliver convincing performances that aid in carrying the narrative forward. Furthermore, Jeon’s greater focus on storytelling compared to his previous films will be a welcome attribute to those who find Jeon’s films too elusive.

Theatrical distribution is unlikely outside the arthouse circuit, but given Jeon’s high profile on the festival market, it’s bound to screen at other festivals in the near future.