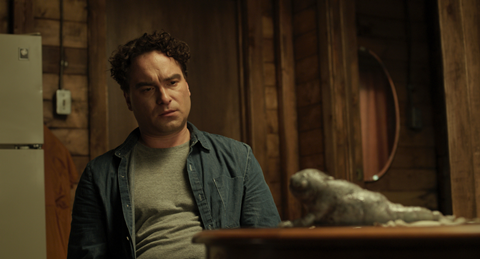 The cinema of imaginary parasites/mutant offspring stretches back to William Castle’s The Tingler (1958), and found squirmy apotheoses in the well-regarded works of David Cronenberg (Shivers, The Brood), Andrzej Zulawski (Possession) and Frank Henenlotter (Brain Damage, Bad Biology). Writer-director Bobby Miller here revisits the theme in his debut feature, taking a fresh, surprisingly low-key and affecting approach to its lunatic premise. By no means a conventional horror film, yet several degrees more twisted and gruesome than the average indie relationships drama, this is likely to appeal to more adventurous cult film fans at festivals and as an on-demand item.

Tonally, the film has a kinship with The Lobster, though it’s much more focused on its core characters

Schlub Paul (Johnny Galecki), drifting after being dumped by his fiancée, applies for a mysterious, new age healing process invented by guru Ken Roberts (Oliver Platt). After a group therapy/interview session, he is selected for a ‘Let’s Get Pure’ retreat in a small class which includes brittle, self-dramatising actress Maggie (Anna Friel), aggressive joker Eric (Kyle Gallner) and his quieter girlfriend Laurie (Diana Bang). In a motel-like facility deep in the woods, stern den mother Lily (Anjelica Huston) sets out the program, which consists almost entirely of drinking gallons of a brew tailored to the cleansee’s specific worries.

Paul gamely goes along with it, swallowing the foul gunk only to cough up a wormlike creature which develops into a repulsive yet weirdly cute critter which externalises his psychic troubles. He develops a fierce attachment to the little monster, and bonds with Maggie - who has spawned a similar doughy homunculus. The cynical Eric does an about-face and becomes doting and possessive about his creature, while Laurie - who had to persuade him to come on this last-ditch attempt to salvage their relationship - has a bad reaction to the process and is an early casualty, demonstrating the ruthlessness of the Roberts system.

Tonally, the film has a kinship with The Lobster, as misfits in a sylvan setting try to force themselves to fit into an unreasonable society where extreme biomutations are an accepted part of life - though it’s much more focused on its core characters. The Roberts System sets out to teach one lesson, requiring the cleansees to complete the process by following ‘elimination’ with ‘termination’, but actually inculcates another, more valuable message as clients come to recognise and even love the most disgusting, yet human parts of themselves.

The last act, when Roberts shows up to sort out a crisis, is well-played and well-written, but a little on the stagey side until a desperate escape attempt leads to a very strange commingling and an ambiguous punchline.

Galecki (The Big Bang Theory) usually plays broad comedy, but reins in his cut-up style to make the hero’s absurd situation surprisingly credible and involving, while Friel (in an adventurous performance that stretches her limits) matches him as a cool yet fractured heroine. Supporting turns Huston and Platt play sinister grotesques who still show flashes of human feeling - that Miller was able to secure such a solid cast for his weird picture is a recommendation in itself.