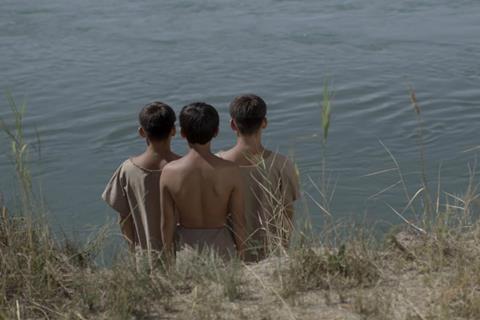 The final film in Emir Baigazin’s “Asian” trilogy, following Harmony Lessons (Uroki Garmonii, 2013) and The Wounded Angel (Ranenyy Angel, 2016), The River (Ozen) is a quietly mesmerising tale of oppression, liberation and a loss of innocence. Rigorously composed and characteristically austere, it casts a spell that should attract support from adventurous distributors and arthouse admirers of uncompromising auteur cinema.

The River unfolds in a remote Kazakh village. The surrounding territory is dry, dusty desert, seemingly devoid of humanity and, in Baigazin’s own cinematography, largely bleached of colour. Five brothers live under the rule of their father (Kuandyk Kystykbayev), a strict disciplinarian who demands obedience, hard work and respect from his sons. They sleep on bare wooden floors and are beaten if they fall below his expectations. His desire to protect them from the wider world look more like a prison than a sanctuary.

The oldest son Aslan (a solemn, stoical Zhalgas Klanov) is being groomed to follow in his father’s footsteps. He has been taught to read and is expected to teach his brothers. His rule is more humane and compassionate. It is Aslan who leads his brothers to a river that becomes a joyous place of carefree escape for the boys. Yet it is also a place of strong currents and hidden dangers.

The river is just the first of many intrusions from the outside world that threaten the established order in this warped Eden. The arrival of the mysterious Kanat (Eric Tazabekov) sows further dissent. His tablet and computer games are a thing of wonder to the boys. A television brings news of conflict from around the globe. There are growing signs of trouble in paradise.

There are clear Biblical parallels throughout the film, from a makeshift scarecrow in the shape of a wooden cross to the rays of sunlight that break through the sky in the manner of a Thomas Kinkade painting to the sense of a paradise lost. Aslan seems intent on building a fair and just life for his brothers but human failings undermine his best intentions.

This is a film that slowly and steadily beguiles. Baigazin frames the individual brothers in doorways and window frames. They are placed in buildings and deserts like chess pieces on a board, forming patterns and shapes that often make the film feel like a modern dance piece. Their clothes and home are so uniformly drab that Kanat cannot help but appear exotic in his shiny silver jacket, long, lemony coloured socks and green hat.

There is always something to catch the eye in Baigazin’s vision, but his spare style is matched by thought-provoking substance as he explores issues of personal liberty, individual responsibility, temptation and family ties that carry echoes of films and filmmakers ranging widely from Claire Denis’s desert-set Beau Travail to the allegorical works of Miklós Jancsó and the iconoclastic musings of João Pedro Rodrigues. The result is an acutely realised, constantly challenging work that is never less than intriguing.