‘The Safest Place In The World’: Doclisboa Review 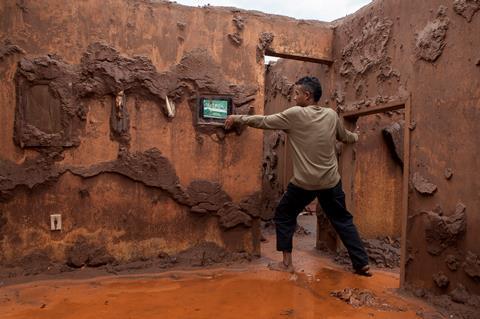 ‘The Safest Place In The World’

Marlon and his extended family have lived in the town of Bento Rodrigues, in Minas Gerais, Brazil, since his grandfather bought a house from a former gold miner. The young man, who grew up swimming in nearby waterfalls and picking fruit from the trees in his garden, knows every inch of the town. Or more accurately, knew every inch. On November 5, 2015, the dam upstream ruptured, disgorging 43.7 million cubic metres of toxic brown mud, the product of the extensive mining operations that riddle the mountains, which surged downstream, destroying much of Bento Rodrigues and neighbouring communities. By focussing on the experience of Marlon over a three-year period, this intimate, small-scale documentary looks at the individual cost of a national disaster.

It’s an effective device, up to a point — the sheer scale of devastation with an incident like this is frequently hard to comprehend. By zeroing in on a single subject, a young man who is coming of age just at the moment when his roots and his foundations have been ripped from beneath him, The Safest Place In The World puts an engaging face on the disaster. But where the film, which is the first documentary feature from both of its co-directors, falls short is in offering a broader context of the event and its aftermath. Filmmakers Aline Lata and Helena Wolfenson also avoid overtly calling to account the multinational company, VALE, which is responsible for this and at least one other catastrophic dam accident in Brazil but has so far faced no sanctions or punishment.

The film opens with footage of the Mariana dam disaster, shot on a phone by an unknown individual whose disbelief gives way to horror as the churning wave engulfs the valley below. Behind the camera, someone urgently calls to a friend who had gone to lower ground to raise the alert. We never learn whether she escaped.

A montage of still photographs of the town as it was shows a sleepy community, small houses dwarfed by verdant vegetation. There’s little which is recognisable when Marlon, jeans rolled up to his knees and his sneakers dangling from their laces, wades through the mud to see the wreckage of his former home. The sediments from the mud have formed a carapace around the photos and the crucifix on the wall. Marlon chisels them off and carefully washes them in the closest thing he can find to clean water. But clean water, it becomes clear, is relative. Marlon, like his father before him, has white patches on his skin from swimming in the nearby river. The implication is that the mines were damaging the health of the community even before they destroyed their homes.

What The Safest Place In The World hints at, in its unassuming way, is the schism between the people of Bento Rodrigues, who still consider the site of the former village to be their home, and the companies which destroyed it. VALE employees peer out of expensive pickup trucks, not quite sure whether to let Marlon and his friend onto the land where they grew up. And a company archeologist sifts through the mud, looking for remnants of a town which is still precisely mapped out in Marlon’s head. Smiling ruefully, he memorises the shape of the mountains on the horizon, convinced that within his lifetime, they will be gone.