Doc accompanies the long-delayed completion of Orson Welles’ final film, The Other Side Of The Wind 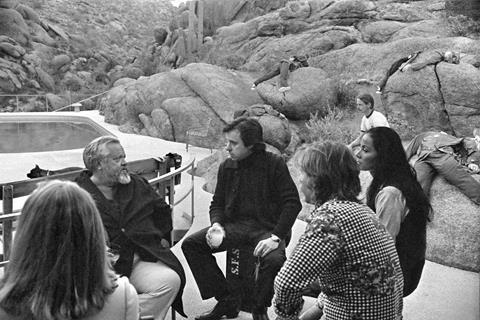 ‘They’ll Love Me When I’m Dead’

“They’ll love me when I’m dead,” Orson Welles allegedly said. And while it’s a matter of debate about whether he actually did say it, one thing is for sure – we haven’t stopped talking about cinema’s arch-magician since he died in 1985. However, the world remains in the habit of discussing Welles in ways that wearied him. To wit: wasn’t Citizen Kane a masterpiece, and how did everything go downhill from there? And how would we be talking about him now if only his final dream project had been completed?

However, that film – The Other Side of the Wind - has been completed posthumously, and Morgan Neville’s documentary They’ll Love Me When I’m Dead tells the extraordinary story of its making, or non-making. Entertaining and informative as a contextualising accompaniment to Welles’s reconstructed experimental project The Other Side of the Wind – and premiering alongside it in Venice before being released by Netflix - Neville’s film may reveal little that hardcore Wellesians don’t already know. But it offers a lively evocation of the great man’s brilliance, waywardness and pained relationship to Hollywood history.

Despite a fussy presentation style – somewhat channeling the frenetic fragmentation of Welles’s own F For Fake – the film will be a must for cinephile viewers, although it’s strictly a de luxe supplement to the fabled main attraction.

Interviewees who illuminate this chimera of a project include include close Welles associates Peter Bogdanovich and Henry Jaglom, this documentary’s executive producer Frank Marshall (who was a production manager on the Wind shoot and produced the reconstructed film) and film historian Joseph McBride, who appeared in Wind.

The doc, its trawl of archive material peppered with clips of Welles over several decades making jokily magus-like pronouncements, intermittently covers his Hollywood fall from grace and years as a European exile. But we also see how the new 60s/70s generation of Hollywood film-makers, in the ascendant as the old studio system caved in, revered him as “somewhere between a Zen master and God” (while a French commentator compares him to “the Cat of Cheshire”).

The Other Side Of The Wind was a film that Welles shot piecemeal over six years and edited into the 80s – partly self-funded and made with a young crew and a number of eager acolytes including Bogdanovich, who initially played a bit part, then stepped into a lead role originally played by comedian/impersonator Rich Little before the latter’s abrupt exit from the shoot. Constantly rewritten and partly improvised, it was about the last day in the life of a veteran film director, although Welles swore it wasn’t autobiographical (“Bullshit,” says one commentator), and intended to play the part himself if his friend John Huston hadn’t been available.

Quite how personal the film was emerges particularly in relation to Welles’s collaborators – he could be cruelly disparaging about both Huston and Bogdanovich. The latter began as a young cinephile idolising Welles, then – as he himself became a successful director – became his impatient benefactor, with Welles moving into his house and in no hurry to move on.

The concept of Wind emerges very much as an experimental response to the new cinema the 60s and 70s - and as Welles’s critique of, even revenge on, Hollywood. Welles’s modus operandi at this point marks him out, some say, as the godfather of US independent directing, shooting material as conditions demanded: some footage was shot on abandoned studio lots, which he sneaked onto using false names.

The story of Wind’s financing and non-completion is hair-raising: at one point, for reasons never fully explained, Spanish producer Andres Vicente Gomez dropped out of the picture, while collaboration with a French-based Iranian company Astrophore went wrong after the Iranian Revolution, resulting in Welles’s footage languishing in Paris for years. The most painful moment of the film shows Welles making a speech to the AFI that was a transparent bid to raise money for Wind’s completion: no-one, we learn, took the bait.

At the end of the documentary, Welles is heard playfully speculating that Wind might not turn out to be a movie as such - “maybe it’s just people talking about a movie.” That’s a fair description of Neville’s film, which gives us the history of Wind but nothing at all about the process by which it has finally reached the screen today. If you didn’t know that Wind, or a version of it, now exists, you could emerge from They’ll Love Me…thinking that Wind was entirely apocryphal, and none the wiser whether it was a masterpiece or a misguided folly.

The virtue of Neville’s film is that it leaves you eager to see Wind and make up your own mind – although Wind itself is a topic on which the critical jury may be out for years.