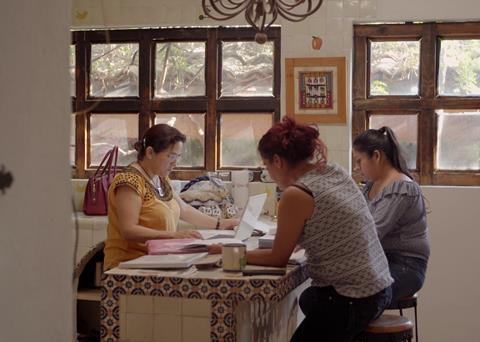 ‘To See You Again’

Against a backdrop of epidemic levels of disappearances and deaths in Mexico – an estimated 250,000 have died and 40,000 have disappeared since 2006 – a group of women put pressure on the government in this powerful portrait of female solidarity. They demand that a mass grave in the state of Morelos, which was sanctioned by the then District Attorney, be exhumed. And the women – mothers, sisters, wives of missing people – insist on being present, not just to bear witness, but to catalogue the crimes of those in authority who assumed that, because a body was unidentified, it must also be unmourned. It’s gruelling certainly, but as a portrait of indomitable courage and tenacity, even as grief threatens to consume all, this is affecting film-making.

Each new body brings with it the hint of a story which in turn prompts the women to think of their own missing loved ones.

To See You Again covers similar territory to Vivos, Ai Wei Wei’s account of the disappearance of a bus full of students in Iguala, Mexico, which premiered at Sundance earlier this year. But while this picture lacks the Ai Wei Wei star power to boost its profile, its sensitive handling of the subject matter is every bit as devastating as that of Vivos. Further festival slots seem likely, as does interest from Human Rights events and organisations. What To See You Again and Vivos share, however, is a sense that this is a story which is still unfolding. Neither film is in a position to offer answers or closure to its subjects or to its viewers. It seems likely that we will see more documentaries exploring the fate of the ‘disappeared’ citizens of Mexico before this grim chapter in the country’s history is finally closed.

“As victims, we transform into attorneys, investigators, experts, anything to get answers.” Given the opportunity to confront the government officials, the women who have made it their mission to learn the fate of their missing loved ones are angry but articulate. There’s a blistering scene at the heart of the film, in which the official who signed off on the mass grave which is currently being exhumed is invited to spend an hour at the site. “You need to taste the people,” says one woman. “They don’t smell, they taste.” The government representatives squirm, offer platitudes, and scurry away. If the rest of the film doesn’t quite match the explosive out-pouring of anger delivered by this extraordinary scene, it still doesn’t lack emotionally compelling moments.

But cheated of the action they demand from the authorities (a closing message reveals that the results of the DNA samples have yet to be released, three years after the bodies were exhumed), the women draw strength from each other. Director Carolina Corral hits pause on the catalogue of tragedy for a moment, showing instead the women exchanging massages and swimming lessons, fortifying each other for the next day spent grimly recording the details of the bodies hauled out of the ground.

Each new body brings with it the hint of a story which in turn prompts the women to think of their own missing loved ones. A puncture wound in the thorax of the body of a female cadaver leads one mother to speculate about what might have happened to her daughter. “It’s as if they go missing twice. First taken by the criminals. Then the District Attorney and the government hides them and so they go missing again.” It’s an unimaginably painful cycle which has been perpetuated by what could charitably, could be regarded as incompetence on the part of the government officials. But complicity with the gangs and drugs cartels can’t be ruled out.