'Vincent And The End Of The World': Locarno Review 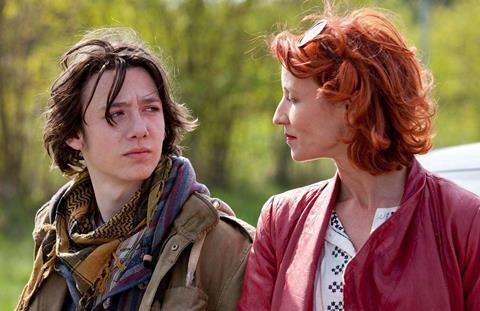 A sensitive, suicidal teenager struggles to cope with his dysfunctional family and an equally broken and definitely doomed planet in Vincent And The End Of The World. Christopher Van Rompaey’s brash, road trip-style comedy survives some uneasy lurches in tone and an excessive running time to emerge as a Franco-Belgian riff on more typically American fare like Little Miss Sunshine.

Audiences are likely to be more forgiving of Vincent’s familiar feel than critics.

While it remains light and likeable enough to connect with audiences on its home territories, Jean-Claude van Rijckegehm’s screenplay is never quite hilarious or original enough for wide play elsewhere.

The film begins with seventeen year-old Vincent (Spencer Bogaert) making an attempt on his life. It is clearly not the first time, as his sister Nadia (Kimke Desart) calls for an ambulance, wearily reporting “we’ve got another emergency”. Vincent is a passionate eco-warrior who spends his time switching off lights, turning down thermostats and unwaveringly following a vegan diet. Al Gore Jr and Gandhi from Belgium are the epithets he gathers during the course of the film.

Vincent believes the world would be better served by his death. He would no longer consume or pollute and his demise could be an example to others. His mother Marianne (Barbara Sarafian) is at the end of her tether and facing the prospect of committing him to an asylum. Enter stage right, like a carefully lobbed hand grenade - Nicole (Alexandra Lamy), Marianne’s half-sister. She has arrived from Paris for her first visit in five years and for no discernible reason. Flame-haired, neurotic, booze-swilling, pill-popping and never afraid to speak her mind, the vivacious Nicole turns Vincent’s world upside down.

Nicole reluctantly agrees to take Vincent with her to Paris, a move that Marianne views as a kidnapping. Marianne gathers together husband Raf (Geert Van Rampelberg), Nadia and pregnant daughter Kelly (Emma Renaert) and sets off in hot pursuit.

The initial appearance of Nicole plunges the film into sit-com territory with Alexandra Lamy feasting on the character’s bitchy one-liners, giddy manner and larger-than-life personality. Clearly neither sister has been pining away during their five-year estrangement. The journey to Paris and a subsequent country wedding catered by Nicole’s chef boyfriend very much marks Vincent as a road trip but one with jarring notes. A sequence in which Vincent heads towards the Eiffel Tower, douses himself in petrol and prepares to set himself alight at what he sees as the injustices of a world that cares little about climate change, scarce resources, poverty and hunger seems at odds with the breezy farce that has gone before.

Elsewhere there is a general predictability to Vincent as the characters vent their disappointments, cause embarrassing public scenes, wind up in jail and journey from bitter resentment of their nearest and dearest to a hard-won warts-and-all reconciliation. You just know that unhappily pregnant Kelly will play her part in the big finale.

Audiences are likely to be more forgiving of Vincent’s familiar feel than critics. There are broad laughs to be found in a film that veers towards the farcical and the cast play it to the hilt. Barbara Sarafian does a nice line in bitter exasperation, constantly allowing years of disappointment to bubble to the surface in her dealings with unhelpful policemen and a husband who seems too mild-mannered for his own good.

Spencer Bogaert has the look of a young James Spader and makes Vincent the comparatively calm and reasonable centre of a family constantly spinning out of control. His wry, watchful gaze is a welcome antidote to the broader pitch of some of the other performances.

Van Rompaey does make some attempt to wrongfoot the audience, including a car crash with potentially lethal consequences, but mostly his instincts are mainstream and crowd-pleasing, right down to a happy ending.