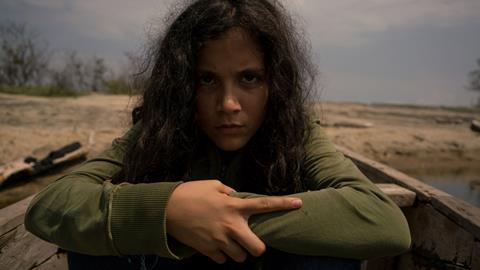 Twelve-year-old Angela (Sofía Paz Jara) is about to enter the uncharted waters of puberty, just as everything that was certain in her life is being taken away. The death of the father who raised her (she never knew her mother, who died in childbirth) introduces her to three adult sisters who share her paternity but who all have different mothers. This engaging road trip follows the four half-siblings across Colombia to Angela’s new home with an aunt she has never met, eavesdropping on shared confidences and nursed grudges, and offering a crash course for Angela on the tricky business of being a woman. Dreamy symbolic fantasy segments speak eloquently of Angela’s uncertainty about the future, and the journey on which her own body is about to embark.

An atmosphere of witchy intimacy which makes stories about sisters particularly alluring.

The precipitating incident, and the shifting dynamics between the four sisters, calls to mind Kore-eda’s thematically similar Our Little Sister. But tonally, this film is a stark contrast to the Japanese work. There’s a languid sensuality here, not to mention a harder edge to the world that Angela and her sisters pass through. Further festival slots seem likely after Wandering Girl’s Black Nights launch. Rubén Mendoza’s fourth narrative feature might also chime with arthouse audiences: although it lacks the dramatic intensity of Deniz Gamze Ergüven’s Mustang, it shares with that film the atmosphere of witchy intimacy which makes stories about sisters particularly alluring.

The death of their father has affected Angela more profoundly than her older sisters. She shuts the lid of his coffin, unwilling to share a final glimpse of his face with the ragtag assortment of mourners who grieve this feckless, footloose man. And, initially, she shuts herself away from any contact with her newly discovered family, her face unreadable and veiled in hair. Her sisters humour her. When Angela declines the opportunity to stretch her legs during the first leg of the cross-country car journey, the eldest, Caro (Carolina Ramirez) posts a bag of potato chips through the tiny gap where Angela has grudgingly wound down the window.

Angela drifts off into her own world, mentally choreographing a pas de deux with the JCB digger which chews up the road ahead. A score composed of haunting vocal harmonies adds to the sense of her disengagement from reality.

But a turning point comes when they all spend the night in a hotel together. Simmering resentments about the differences in their backgrounds come to a head, but Angela defuses the tension and stakes an incontrovertible claim to the father they all contest by playing a message that he recorded for her. The camera weaves among them, capturing a real sense of loss, resulting not just from his death, but from his absence in their lives.

While the older women realise that Angela shared a bond with their father that they never did, she in turn finds something in the easy physicality and intimacy between her sisters which has been missing from her own life so far. She scans her sleeping sister’s body, looking for a map for her own approaching sexual maturity. She takes on board the advice they give: “Don’t let them choose you. You choose them,” says Pau, who has a tattoo for each of the men she loved and left. Meanwhile Caro, the only mother among them, gently diffuses some of the fear that is knitted into Angela’s expectations of her own body, and the mysteries it holds.

The striking backdrop of rural Colombia is evocatively used; the interaction between the sisters and the landscape, particularly a joyful scene at a beach, is one of the film’s most tangible pleasures.