'War On Everyone': Berlin Review 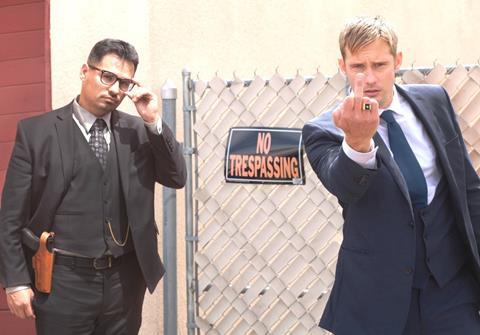 After The Guard and Calvary, writer-director John Michael McDonagh is hot property – and it shows in this generously budgeted third feature, an indulgent homage to the 1970s buddy cop genre that veers like the Monte Carlo coupe driven by Alexander Skarsgard’s hard-drinking character from dark comic brilliance to wearisome style exercise – the exercise being, mostly, to make two utterly corrupt, foul-mouthed New Mexico policemen sympathetic.

In this, it almost succeeds, thanks in no little part to the chemistry between Skarsgard and Michael Pena. But the glue of their jive-talking, bribe-taking relationship fails to stick together a contrived story. War On Everyone is essentially a clothes hanger for smart one-liners, verbal and visual, and its success will depend partly on how folks like the look of the clothes hanger. The film seems high on the desert air of New Mexico: painted in garish colours, cut fast and flashy, featuring big chunks of Glenn Campbell on the soundtrack. It’s a kind of French Connection in Albuquerque meets… just about any other hard-boiled genre film you can think of, Tarantino’s included.

Perhaps this will be enough to collar the kind of savvy urban audiences that mop up genre parodies like Kick Ass or Kiss Kiss, Bang Bang. But in a film that takes a schoolboy’s delight in being politically incorrect, taking potshots at everything from police racism to Stephen Hawking to Al Qaeda, there are some off notes – clichéd gay and transvestite characters, for example, that will leave a nasty taste.

McDonagh sets the tone of relentless high-octane irreverence by having sharply dressed Terry Monroe (Skarsgard) run over a small-time-crook mime artist in the first scene, after his cop partner Bob Bolano (Pena) wonders whether mimes make a sound when they’re hit. These two are bad, but not bad bad – between wisecracks, Monroe is a soulful loner with a drink problem, while Bolano is a family man who has brainy arguments about Simone de Beauvoir with his smart-but-supportive wife Dolores (Sigman) while badmouthing his kids.

Living in and out of each other’s pockets, the two seem worn down by life, and they jadedly take it out on the world by being up for any crooked deal that comes their way, allowing suspects to buy their way out of charges and sharing the coke they had brought to plant on newly converted Muslim Reggie X (Barrett), once they’ve convinced him to turn informer. The story careers from one lead to another, from the Velvet-Goldmine-ish dandy nightclub owner overplayed by Caleb Landry Jones to the cool, cruel British lord (Theo James, at home in the role) who is flagged from the start as the criminal mastermind the duo don’t quite realise they’re chasing.

Lava-lamp blobs of sentiment are thrown in to balance the relentlessly sardonic tone. Hence Terry’s fling with former bar girl Jackie (Thompson) and, less pardonably, the introduction of a vulnerable kid, a victim of abuse who Terry ends up taking to the minimalist desert-edge bachelor pad he’s already opened up to Jackie. Sure, the parody of the ‘alternative family’ trope is flagged by a throwaway line of dialogue – but here as so often, McDonagh is trying to persuade us to have the smart-ass cake and eat the emotional resonance too.

The film’s time zone is a flashy but fairly random mash-up between now (the X-box Bob’s kids play with, references to Isil and Al-Qaeda) and an idea of the 1970s which comes through in music (squelchy horns, a cheesy classic by French-Italian actress and pop singer Catherine Spaak), costumes (mustard, turquoise and burgundy), gas-guzzling cars, references to black power and radical feminism.