‘You Are Ceausescu To Me’: Doclisboa Review 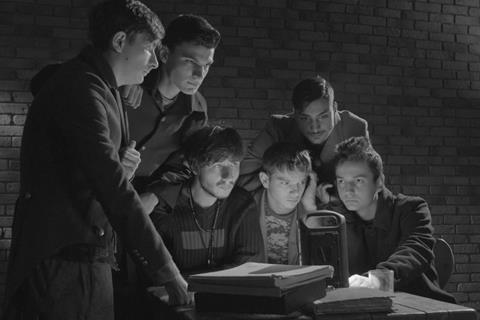 ‘You Are Ceausescu To Me’

When one young amateur actor tells another, “You are Ceausescu to me,” the implication appears to be that we are all Ceausescu — at least, if we happen to be young present-day Romanians. Playing in the international competition of Doclisboa, Sebastian Mihailescu’s experimental documentary You Are Ceausescu To Me confronts contemporary Romanian youth with aspects of their national history that their generation may have forgotten — or never learned in the first place — and juxtaposes his young cast with the image of the future Romanian dictator at their age.

The acting ranges from the spirited to the stilted

The project feels genuinely experimental in the sense that Mihailescu appears to set up a conceptual framework without necessarily having defined outcomes in mind. The outcome for the viewer is certainly moot, and while the film is lively — not least thanks to its cast — any clear-cut payoff feels elusive. This very niche prospect will be most of interest to documentary specialists interested in the current grey areas and outer limits of this film form.

The setting is a film studio, where Mihailescu has assembled a group of young people to enact scenes from the life of Nicolae Ceausescu, Romania’s head of state from 1967 until his execution in 1989. In particular, the film focuses on Ceausescu’s early years as a Communist Party activist in the 1930s — when he was roughly the age of the people playing him here — which is when he underwent numerous arrests, trials and periods of imprisonment.

The documentary begins with some of Mihailescu’s cast recreating a moment of Ceaucescu’s imprisonment, then shows the audition process. The central cast is whittled down to a group of five young men, mainly in their late teens — including rakish Amador, earnest Denis and Mihai, a bumptious type who loves playing to camera, and imitating Robert De Niro. They’re seen early on in close-up shots that suggest movie-star profiles, a la Studio Harcourt, but also heroically posed political portraits of the Communist era.

These boys swap the role of Ceausescu as they and the support cast enact scenes from his trials, interrogations and other early episodes, often in ludicrous costumes (cloaks, cowboy hats, even a lion’s head) that suggest an impromptu school panto. The acting ranges from the spirited to the stilted; in between takes, the participants hover around the studio for what appear to be spontaneous discussions about Ceausescu, the nature of ambition and will, and what they want out of life.

You Are Ceausescu To Me begins with a quotation from philosopher William James — “The deepest principle of human nature is the craving to be appreciated” — and that craving manifests itself in different ways among these young people. One is serious about perfecting his dramatic art, Mihai seems to be cheerfully fixated on stardom and success (jokily playing the role of a director, he tells his co-stars that he’ll lead them to the Oscars), while another prides himself on his reputation as a gigolo and a specialist in romancing older women.

One wonders whether it was Mihailescu’s design to foreground maleness as a satirical commentary on the patriarchal legacy of Ceausescu, but it’s notable that the film’s female presence is minimal, indeed marginal. The role of the dictator’s future wife Elena Ceausescu is played by the boys, while one young woman, Francesca, briefly gets to play a waitress. She does, however, contribute one of the more interesting moments of a group discussion, talking about her Roma background, but otherwise seems awkwardly stranded at this boisterous boys’ dressing-up party.

Mihailescu himself occasionally barks commands from off-screen, and is occasionally seen — struggling to erect a gazebo in the rain, or explaining that he’s making a documentary because he can’t afford a feature. A strange final scene has him telling an actor that it’s his first film and he knows it could fail — while, bizarrely, the sky over Bucharest seems to undergo a solar eclipse. Overall, the film appears part of a self-reflexive turn in current Romanian cinema, typified by Radu Jude’s Uppercase Print and Berlin-winner Bad Luck Banging Or Loony Porn; Mihailescu’s film could arguably be considered ‘school of Jude’ not least because it shares his archival interest in Romania’s past (here, in the form of lightning-speed montages of documents and photos).

While the film sometimes seems to hover directionlessly around its central theme, it definitely scores in its visuals, with crisply imposing black-and-white photography by Barbu Balasoiu, who has worked with Spanish documentary and fiction director Antonio Mendez Esparza (Courtroom 3H) and shot Cristi Puiu’s Sieranevada. Working largely in locked shots, and giving imposing composition to otherwise ramshackle scenes, Balasoiu also confects images in which the actors recreate group portraits and archival photos, with black-and-white supplemented by highly period-style pastels.