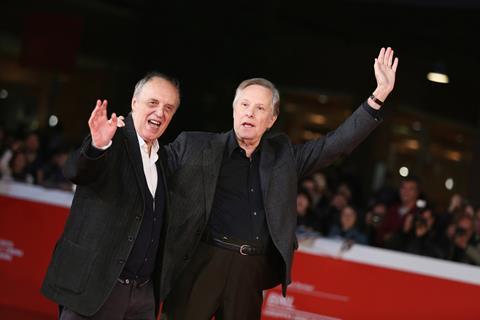 Presenting clips from Argento’s 1975 horror classic Profundo Rosso (Deep Red), Friedkin showered Argento with praise for his ability to work not just a from a script, but from inspiration.

“His work is so unique. The colour, the settings, the music, the strange angles: he’s an impressionist painter like Goya or Caravaggio. He has the ability to let his imagination go on set. Who else can make fear and death entertaining?” said Friedkin.

When asked why Argento dives so deeply into the darkness of the heart, Argento responded: “These are deeper fears of mine. Freudian fears, sexuality fears, the inner dimension of my subconscious.

“These are not Italian stories, but stories that originate from my inner soul - they could belong to anyone.”

Argento chose Friedkin’s horrifying exorcism scene from the 1973 classic The Exorcist to demonstrate his work.

“He’s a giant. He expresses his energy through his films,” explained Argento. “Just look at The Exorcist and French Connection - no one has managed to make films like that since.”

“That’s because they’re all made from special effects - what we did in our time was real,” replied Friedkin. “When a car crashed, it really crashed. That is more visually effective than any CGI film today.”

“He was a man who could recognise talent in others, and I guess he saw talent in me,” recalled Argento.

“I remember he had never worked with a woman as a main character before, so we had to help write the character and find the actress. He was a bit of a mysoginist, but incredibly insightful.”

Friedkin on working with Hitchcock

Friedkin recounted his start in the film business, working primarily on hard-hitting documentaries in Chicago. Because of [The People vs Paul Crump] that helped save one man from electrocution, Hitchcock asked him to direct the final episode of the Hitchcock Hour.

“I remember wearing a t-shirt and jeans on the one day Hitchcock came to do his voice-overs. When he walked over to introduce himself, he simply said: “Mr Friedkin, usually our directors wear ties.”

In retaliation, several years later in 1971, when Friedkin won the Director’s Guild Award for The French Connection, he walked up to Hitchcock, unclipped his bow tie and said, “Mr Hitchcock, how is this for a tie?”

On making The Exorcist

“This was an immense film,” said Argento. “It has terrified generations and will continue to do so.”

The film-maker then turned to Friedkin and asked, “But how did you get it so cold in that room?”

“Sitting on top of the room’s four removable walls were high-powered air conditioners that could cool down The Vatican,” insisted Friedkin. “The problem was when we turned the camera lights on, the air would change from -40F/C to room temperature. So we would have to turn the lights back off and wait again for the temperatures to cool down.”

Friedkin also remembers the difficulty in capturing the breath on film: “We had back lights and side lights set up. But I didn’t realise in order to see the breath on film, we had to light from the front. We wasted a lot of time working that out.”

When asked why he made the film, Friedkin simply said: “Because I believe. It’s based on a true case from 1949. His name is Roland Doe, he is still alive, and has worked at NASA. He remembers nothing about his experience.”

Friedkin continued, “When we spoke directly with his aunt, she also provided revelatory details.”

On love and death

While Friedkin gave an adorning ode to his wife and former Paramount Studios Head Sherry Lansing, Argento instead recounted, ”Wives have certainly played a role in my work. At first you have enthusiasm, then they’re your ex-wife.”

He continued by giving praise to his daughter [actress/ film-maker Asia Argento] who worked with him from the age of ten years-old, along with older daughter Fiore Argento.

The session concluded when Friedkin boldly asked Argento if he had ever tried committing suicide.

“I talk about this in my autobiography I wrote two years ago,” said Argento. “When I was making Suspiria - I tried to take my life. I don’t know why; I had lots of lovers, I had a successful film.”

Friedkin prodded, “What stopped you?”

“I was staying in a hotel on the sixth floor with a big window overlooking Via Veneto. A doctor friend of mine told me suicide can happen in an instant. So I called the porter and asked if he would move all of my hotel furniture against the window - that way if I wanted to jump, it would take me more than a few seconds to move everything.”