Director of Skyfall, Spectre, and American Beauty spoke about his career at BAFTA event. 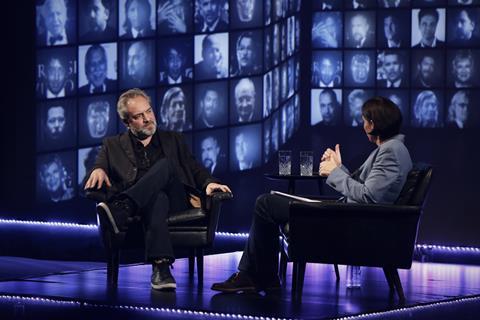 The mastermind behind the latest Bond films, Sam Mendes, opened up to a packed theatre about his methods and films at a BAFTA career retrospective last night [Nov 30].

Speaking as part of the ‘BAFTA: A Life In Pictures’ series, Mendes took the audience through each of his seven films: American Beauty, Road To Perdition, Jarhead, Revolutionary Road, Away We Go, Skyfall, and Spectre.

Speaking about Spectre, Mendes revealed that he had less time to work on the story than he did with previous Bond film Skyfall:

“So everything stopped except the work with the writers, and we spent nine months going down various blind alleys with the script and with the story, and gradually the story emerged. And it takes that long, and one of the other things I found frustrating about Spectre was that I didn’t quite have the amount of time I wanted, you know because of obvious pressures you know.”

Mendes began his creative life in the theatre, running the Donmar Warehouse for ten years and directing large productions such as Cabaret and Oliver!.

After transitioning to the screen, he said he learned that, while there are some similarities between the two mediums, directing actors for a film is essentially different:

“I think if you’re working with an actor for example, what you’re seeking to do on stage is to find a way to engage that outside eye, so that what they’re doing in rehearsal they can repeat.

Mendes’ films range from comedies to gangster movies, from relationship dramas to action epics. He explained why he seems to always jump genres:

“Part of that is my nature I think, I’ve always wanted to explore different ways of making films and challenge myself and not repeat myself. But part of it is also the after effect of success with my first movie, because of what comes with winning an Oscar for your first film [American Beauty].

“How do you justify that? How do you make that okay? And I decided very early on to make it like a kind of bank loan, that I would pay back over time, and I would eventually justify having won to myself and to my peers. Because you know it’s very, very tricky to try and, well where do you go now? Well do we just keep repeating the same thing or do we keep pushing and trying out and exploring?”

“Yeah, well the thing about American Beauty, it was a brilliant script [written by Alan Ball], and the fact that the script found its way to me was one of the luckiest things that’s ever happened to me.

“[Alan Ball] was a first time screenwriter, producers Dan [Jinks] and Bruce [Cohen] were first time film producers, and I was a first time director. So actually it was a gang of people finding out how it worked all at the same time, and that was also helpful, because I never felt patronised or guided by another person, I felt like I was able to discover the movie I wanted to make for myself.”

“It was a very solitary and lonely time [during the making of Road to Perdition], coming back from making American Beauty and all the acclaim, and feeling, myself, sort of very isolated, and a lot of that went into the film. And the sort of the coldness in and around the movie, the sort of stillness of it, that comes from my mood at the time. I mean I think that happens much more than in theatre, the mood and the way you feel and your emotional landscape gets put into the films that you make almost subconsciously.”

Medes said he made Jarhead to “shake things up” but admitted that he wasn’t as satisfied with it as his other films:

“You know people always say, film directors particularly say, ‘Oh they’re like your children, you don’t value one over the other.’ But there are some that didn’t complete their education properly, put it that way.

“So you know this one feels slightly like an errant child and I felt like it was my, you know, flaws that weren’t able to craft it in a way that I wanted it to be.”

“I found it very frustrating because [Revolutionary Road] is based on a great novel [by Richard Yates], and novels are not shaped like movies. Movies tend to be linear on the whole, the best of them, I think.

“And Revolutionary Road has a problem which is that it starts with them, a couple very, very unhappy, it takes them to happiness briefly, and then it takes them back down to where they started. Well that fundamentally, I always struggled with as a shape, a narrative shape…So I was always sort of reaching for, to try to find, I was always fighting against this novelistic shape.”

“And you know what happens I think with larger movies [like Skyfall] now is that you’re in a dialogue with the audience from a very early stage. You know your audience is commenting on and reviewing the title, you know the press conference, the casting, the song, the trailer, the second trailer, the poster, and it’s a constant dialogue that goes on for 18 months.

“And so you have to just create a world around the camera which is absolutely private, and that doesn’t matter whether it’s the largest scene in the movie or the smallest, you can only shoot one thing at a time.”

After showing the opening sequence of the movie, which takes place during the Day of the Dead festival in Mexico City, Mendes explained how he felt after successfully coordinating all the pieces in the scene:

“2,500 people working in tandem at the same time is a really big high for a director, when everyone gets it right it’s very exhilarating.

“You sit in a room and you imagine a city, you imagine a South American city, you imagine these people, you imagine this celebration, and then through the hard work and brilliance of so many thousands of people you can realise it. It’s a pretty amazing job to have and a very, very wonderful privilege to be able to do it, and to know that an audience will also come and see it too.”

When an audience member asked what he was going to work on next, Mendes laughed and said:

“The thing I’m working on next is a large holiday - with the two Bond movies and the two theatre productions I did in between I’ve been working for five solid years and I need a break.”