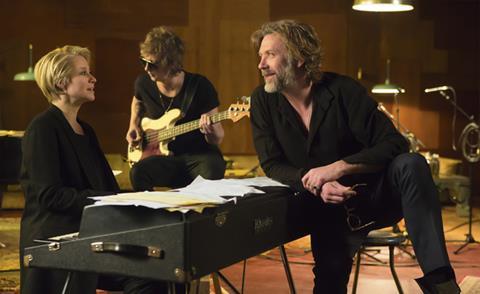 Christensen is clearly at home in the chilly Danish vistas and bleached interiors, a blizzard of white and contrasting greys leavened only by the bright blue eyes of the film’s sulky protagonist and his grandson.

Set in the bleached Danish snow, Someone You Love isn’t really out to make friends, much like its glum protagonist who has finished with human interaction after “all the booze, divorces and drugs”. Musical interludes don’t lift the mood either, as Persbrandt’s character Thomas Jacob sings in English like an unhappy Leonard Cohen with a penchant for awkward lyrics including: “Whatever happened to the whispers?” Indeed.

Director Pernille Fischer Christensen won the Silver Bear at Berlin for her debut En Soap back in 2006 and followed it up in 2010 with A Family, whose producers Vinca Wiedemann and Sisse Graum Jorgensen (A Royal Affair, The Hunt) reunite on this Zentropa production which is being sold through TrustNordisk.

Persbrandt and his co-star Trine Dyrholm (under-used and a little unconvincing as the musical producer) themselves sing on many of the tracks and that, coupled with the production’s pedigree, will spark interest on Someone You Love’s release in Nordic territories. Elsewhere, it may struggle to make the charts.

Thomas Jacob (Persbrandt) is a rock star who escaped his abusive childhood for international stardom only to become an alcoholic and drug addict. Now sober for six years, he reluctantly returns from Los Angeles to record his new album with Danish producer Molly (Dyrholm). Tattooed and monosyllabic, he sets up in a castle in the countryside with his British manager Kate (Eve Best) and is reluctant to forge any relationship with his daughter Julie (Brigitte Hjort Sorensen) when she approaches him for money. A coke addict herself, she arrives with Thomas’s 11-year-old grandson Noa (Sofus Ronnov) in tow. Thomas shows absolutely no interest in the boy. “We won’t get a new happy childhood back, he tells her. “Now is now.”

Events, of course, are conspiring to force his hand.

To its credit, Someone You Love doesn’t exactly try to reinvent the wheel – it’s the type of film where a casual shot of a booze cupboard is screaming with intent. Christensen opts for silence and introspection, confidently allowing Persbrandt’s Thomas generous space to be a convincing bully and misanthrope for a large portion of the film’s running time, believing her audience will still root for his redemption.

While he’s not brooding, Thomas confides in the most inappropriate manner in his sweet-faced grandchild, to the point where a mooted boarding school begins to look like The Great Escape for the depressed little boy.

Staging here is uneven. Christensen is clearly at home in the chilly Danish vistas and bleached interiors, a blizzard of white and contrasting greys leavened only by the bright blue eyes of the film’s sulky protagonist and his grandson. The musical sequences feel surprisingly inauthentic, however, and somewhat forced by the end, although Laust Trier Mork’s camera captures some appealing imagery, particularly a reflection of the grandson in the shadow of “the worst grown-up I know”.