Main Street was inundated during Saturday’s March On Main as approximately 4,000 people according to police estimates took over Park City. 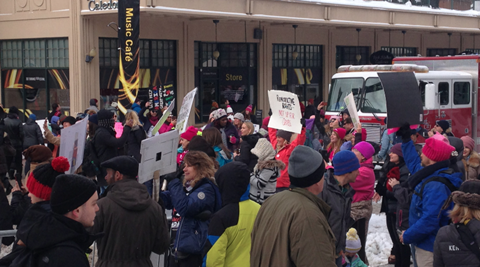 Marchers resisted the snow and low temperatures to bear placards in support of women’s rights, the environment and healthcare as a strong anti-Donald Trump sentiment rippled through the crowd. At time of writing there had been no arrests.

The march was one of 350 sister events across the US and 20 countries in conjunction with the huge Women’s March On Washington on the first day of the 45th US president’s term of office.

“Hello all you pussies!” actress Mara Bello told the assembled Park City crowd. “When they punch you in the pussy, punch them back with your pussy power.”

Bello’s comments drew prolonged cheers and were in reference to Trump’s notorious 2005 remarks about groping women that came to light late last year.

People carried banners that reflected a multitude of concerns as Trump’s four-year term in the White House got underway following his inauguration on Friday.

“#Resist Tiny Hands”, “Viva La Vulva”, “Climate Change Is Real”, “I Stand With Planned Parenthood”, “Reproductive Rights Not Up For Grabs”, “Don’t Take Away My Care” and “Stronger Together” were some of the placards on display.