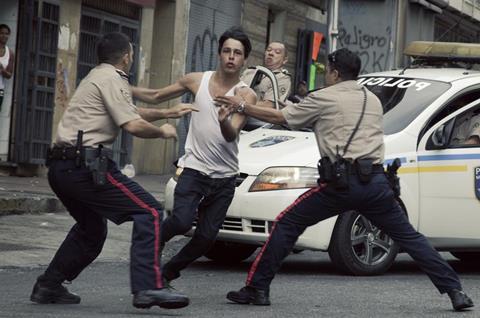 From Afar (Desde Alla), the first Venezuelan production to appear in Competition at the Venice Film Festival, has won the Golden Lion for Best Film.

The directorial debut of Lorenzo Vigas concerns a middle-aged man (Alfredo Castro) who pays young boys to spend time with him. One day he befriends an 18-year-old delinquent (Luis Silva), a development that affects both profoundly.

The film, sold by Celluloid Dreams, is produced by Oscar-nominated screenwriter Guillermo Arriaga, who co-wrote the script.

Trapero has a good relationship with Venice, having won two prizes for his 1999 debut, Crane World, returning in 2004 with Rolling Family and sitting on the Golden Lion jury in 2012.

The Clan is based on the real-life exploits of a Buenos Aires family who kidnapped and murdered their affluent neighbours.

The film was funded by a Kickstarter campaign, which raised more than twice its $200,000 target and was launched by producer Starburns Industries in order ‘not to be compromised by the Hollywood studio system’.

Voiced by Jennifer Jason Leigh, Tom Noonan and David Thewlis, the film - adapted from Kaufman’s stage play and sold by HanWay Films - focuses on a motivational speaker who is overcome by life’s mundanity.

Best Actor went to Fabrice Luchini for his portrayal of a judge in the twlight of his career in Christian Vincent’s French feature Courted (L’Hermine). Vincent also won Best Screenplay.

Best Actress went to Italy’s Valeria Golino for her role as a tormented woman in Giuseppe Gaudino’s Per Amor Vostro.

Attah plays an African child soldier alongside Idris Elba as a local warlord in the drama, on which Fukunaga (True Detective) spent seven years working on the script of this adaptation of Uzodinma Iweala’s novel. The film is also notable as Netflix’s first major theatrical acquisition.

Childhood of a Leader triumphs

The Lion of the Future prize for best debut film went to Brady Corbet’s The Childhood of a Leader, starring Robert Pattinson, Liam Cunningham, Bérénice Bejo and Stacy Martin.

The fable on the rise of fascism marks the directorial debut of Corbet, better known as an actor in films such as Melancholia and Thirteen. The award comes with a $100,000 prize.

Corbet also picked up the best director award in the Horizons (Orizzonti) strand of the festival, in which the film played.