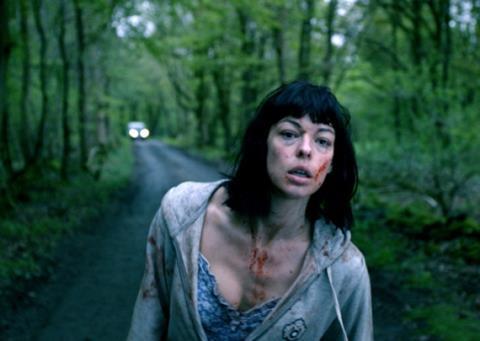 This minimalist horror-suspense item scrambles the premise of Mike Figgis’ Cold Creek Manor with the plot of David Moreau and Xavier Palud’s They (Ils), then delivers an ending which would play on a short, but violates the central tenet of the horror genre that things should be worse than they seem. The film had its premiere at London’s FrightFest event.

Director Simeon Halligan, who made the more intense rural horror Splintered, stages the attacks well and McIntosh conveys growing toughness, but the story doesn’t follow through.

Ian Fenton’s script draws on the social issue (not confined to Scotland) of long-time inhabitants of rural areas being priced out of home-ownership by city-dwellers who can afford to pay inflated house prices, and opportunistically trades on Anglo-Scots tensions in the year of the independence referendum.

Affluent London couple Sarah (Pollyanna McIntosh) and Ed (Lee Williams) buy a rambling former family home in gorgeous Scottish countryside (played by Derbyshire) from the bank that has repossessed it after the semi-mysterious death of a debt-ridden former owner.  The estate agent (Joanne Mitchell) explains that this was the site of a historic battle between the Scots and the English, and its outcome depends on who you ask – foreshadowing what’s to come.

On their first night in the place, the frisky couple suffer a few minor inconveniences – a lurking local child, blown fuses, hints of a prowler, some lively foraging piglets – which ramp up Sarah’s undefined anxieties.  Then, they are assailed by pig-masked, Scots-accented goons who invade the house according to ‘the big man’s plan’.  Ed is sidelined with a sack over his head for a long stretch, putting all the dramatic weight on McIntosh (The Woman).

Previously more often a cast as threat than a victim, the Scots actress credibly plays an English incomer.  Sarah fights back, gruesomely battering in one masked skull, and limps through the mantrap-infested woods, pursued by the piggies.  Director Simeon Halligan, who made the more intense rural horror Splintered, stages the attacks well and McIntosh conveys growing toughness, but the story doesn’t follow through.

The couple blithely ignore the previous owner’s family possessions strewn around their new house, but aren’t nasty enough to justify the title or sympathetic enough to make their plight very upsetting.  Compared to Ils – or The Strangers or Eden Lake – this is a long night of terror that dissipates rather than escalates.

Production company/contact: Not A Number, www.notanumber.co.uk