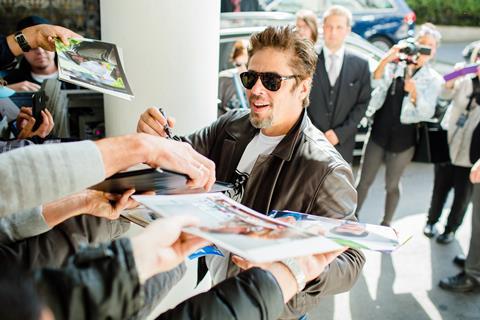 Benicio del Toro has said that he tried to capture the contradiction in Colombian drug lord Pablo Escobar while portraying him in thriller Escobar: Paradise Lost:

“The film is clear. Escobar had two faces. He was a family man. He seduced a whole country but at the same time he brings it down. That was Pablo. He became a Robin Hood who also bled the country out.”

Speaking at a Zurich Film Festival press conference, the Che star said he had mixed feelings about the infamous Escobar:

“I have pity for him. I don’t like what he did. He was a talented man who wasted his talnet. But he brought a lot of suffering to a lot of people. He isn’t someone to emulate.”

Del Toro stars alongside Josh Hutcherson and Claudia Traisac in the thriller about a young surfer who meets the woman of his dreams but who also happens to be Escobar’s niece.

“I wanted to make a movie about a young man whose destiny was fatally changed by an encounter with a superhuman character,” said actor turned director Andrea Di Stefano. “I saw the potential to make a kind of Greek tragedy.”

The Hunger Games star Josh Hutcherson joked that he was “seduced’ by Del Toro during the shoot:

“I met Benicio a few years ago when he directed me in a short film. I’ve seen his movies and I know what he does on set. He’s pretty intense so I was a little nervous. But knowing him personally from before helped”.