Zurich Film Festival on the A-list 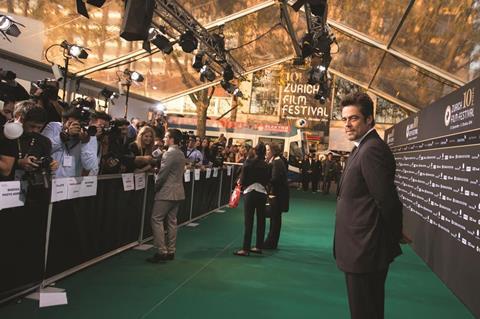 A mix of top titles fresh from Toronto, A-list guests and an exclusive industry summit have helped Zurich Film Festival (September 24-October 4) carve out a strong position in the crowded festival calendar. It now faces a challenge if it is to top last year’s 10th anniversary edition, when it recorded its biggest ever attendance levels, reaching 79,000 admissions for 145 titles, and attracted top-line talent including Liam Neeson, Cate Blanchett, Benicio del Toro and Diane Keaton.

“We always raise the bar higher, and it is always a challenge, but it’s what I like about this festival,” says Zurich artistic director Karl Spoerri, who was one of the festival’s founders in October 2005, when a three-day event focused on debuts and drew 8,000 visitors. A boost in budget may help Zurich reach even greater heights, and Spoerri confirms the pot has grown to nearly $8m through shrewd partnerships and private sponsorship deals.

Zurich is almost uniquely positioned in its ability to offer the best of the year’s festivals to date, coming hot on the heels of Toronto and programming award-winners from Sundance, Berlin and Cannes. Titles in this year’s Gala strand include Scott Cooper’s gangster drama Black Mass, starring Johnny Depp, and Ben Wheatley’s highly anticipated High-Rise, starring Tom Hiddleston, not long after their world premieres in Venice and Toronto respectively.

It makes Zurich a key festival to launch movies to the lucrative German-speaking market, following Berlin in February and Munich in June. “All the German media comes to the festival,” says Spoerri. “This year will also be a strong one for German titles — and co-productions with German involvement — in our line-up. You’ll see a mix in the Galas as well as the competition.”

Zurich will also continue its film-sharing partnership with San Sebastian Film Festival, which has been in place since 2013. “We love working with Jose [Luis Rebordinos, artistic director of San Sebastian],” says Spoerri. “It’s a great partnership and we’ll be screening films from their competition line-up again this year. Everyone benefits from it.”

This year Iran will be the guest country in Zurich’s New World View section, which contains 12 new features and documentaries from the latest generation of Iranian directors. “We have hosted interesting Iranian film-makers here for the last couple of years,” says Spoerri, highlighting the recent international attention drawn to auteurs such as Palme d’Or winner Abbas Kiarostami (Taste Of Cherry), Oscar winner Asghar Farhadi (A Separation) and Jafar Panahi, who won the Golden Bear at this year’s Berlinale with Taxi.

“It’s a very interesting country because they have very modern, progressive film-makers working within a system that puts people under house arrest,” continues Spoerri. “They have to make films in a totally different way, and have to be super creative to get things done.”

UK director Mike Leigh is to receive the Zurich Film Festival’s A Tribute To… award. The director of Mr. Turner, Vera Drake and Secrets & Lies will collect Zurich’s Golden Eye trophy during the festival’s awards ceremony on October 3. Leigh will also deliver a public masterclass at the festival, which will screen a retrospective of his films.

On the industry side, the Zurich Summit, which Spoerri masterminded alongside conference organiser Winston Baker, will return for a second year to replace the Film Finance Forum, which launched at Zurich in 2010. Now invitation-only, the multidisciplinary summit will include speakers such as ProSiebenSat CEO Thomas Ebeling, HBO Europe’s Antony Root, Birdman producer John Lesher and Paramount Pictures’ Eben Davidson.

As for Spoerri, he is eyeing a future in film-making but won’t be hanging up his festival duties just yet. “I’m interested in producing and I’ll do that sooner or later,” he says. “But until then, this festival is my first priority.” ns