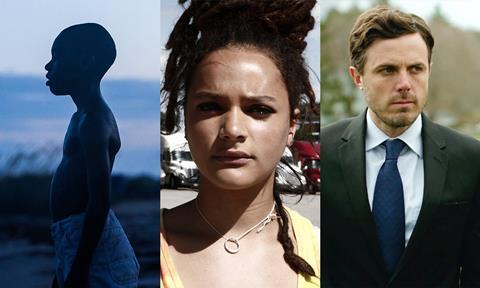 Newcomer Robert Eggers earned two nods for The Witch in a great day for A24, which financed and distributes Moonlight, and distributed American Honey, Morris From America, and Swiss Army Man, and has 20th Century Women on the runway for a December launch.

American Honey and Moonlight will vie for the best feature prize alongside Manchester By The Sea, Fox Searchlight’s Jackie and Monument Releasing’s Chronic.

The category has become a bona fide harbinger of Oscar success as best feature winners Spotlight, Birdman and 12 Years A Slave all went on to claim the Academy Award best picture statuette in the last three years.

American Honey’s Arnold is one of two women in the mix for the directing prize alongside Kelly Reichardt for IFC Films’ Certain Women. Rounding out the quality category are Jenkins for Moonlight, Chilean auteur Pablo Larrain for Fox Searchlight’s Jackie, and Jeff Nichols for Focus Features’ Loving.

In one of the biggest surprises of the morning, Lonergan was not among the directing nominees, although he was recognised in the writing category and is likely to rebound in the weeks ahead as critics groups and other voting bodies unveil their selections.

The Spirit Awards generally point the way in the acting categories too, and in an exceptional year for women, American Honey’s breakout star Sasha Lane finds herself alongside a heavyweight quartet.

Annette Bening is included for 20th Century Woman, as are Natalie Portman for Jackie, Ruth Negga for Loving and Isabelle Huppert for SPC’s Elle – all four are among the frontrunners for Oscar glory.

Venice Coppa Volpi winner Emma Stone from La La Land was always going to be absent from this list as the film’s $20m-plus budget made it ineligible for Spirit Award consideration. Similarly, the budgets on Focus Features’ Nocturnal Animals and A Monster Calls ruled those films out of contention.

Casey Affleck confirmed his credentials as the Oscar frontrunner in a relatively weak year for men. He will compete for the male lead prize with Viggo Mortenesen for Bleecker Street’s Captain Fantastic, Tim Roth for Chronic, David Harewood for Free In Deed – which at time of writing did not have US distribution – and Jesse Plemons for Netflix’s Other People.

Michelle Williams for Manchester By The Sea and Mahershala Ali and Naomie Harris from Moonlight were not recognised for their supporting roles. The Moonlight pair received attention in the Robert Altman Award for director, casting director and ensemble, and could figure prominently in individual categories as the season progresses.

Aquarius – snubbed as Brazil’s foreign language Oscar submission – will vie for the best international film prize alongside Germany-Romania’s Toni Erdmann, the UK-Iran’s Under The Shadow, France’s My Golden Days, and Greece’s Chevalier.

Documentary contenders include Ana DuVernay’s 13th, Raoul Peck’s I Am Not Your Negro, and Ezra Edelman’s mini-series O.J.: Made In America.

The 32nd annual Spirit Awards will be handed out on February 25, 2017 – one day before the climax of the awards season at the 89th annual Academy Awards ceremony in Hollywood.

The nominations appear below in full: