Anthony Dod Mantle talks shooting 'In The Heart Of The Sea'

Inspired by Turner and Delacroix, cinematographer Anthony Dod Mantle tells Mark Salisbury how intensity was key for In The Heart Of The Sea. 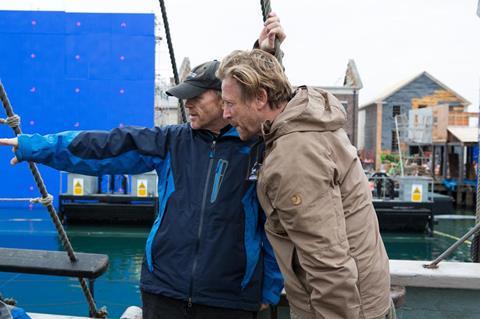 From his pioneering digital work on Dogme title Festen through to his Oscar-winning Slumdog Millionaire, UK-born Anthony Dod Mantle is one of cinematography’s most innovative and distinctive talents. For In The Heart Of The Sea, Dod Mantle reunited with his Rush director, Ron Howard, to tell the ill-fated true-life tale of the Essex, a New England whaling ship that was sunk by a mammoth whale in 1820, leaving its crew stranded at sea for 90 days. It was the maritime disaster that inspired Herman Melville to write Moby Dick.

“I’m petrified by the sea. The way the weather changes and moves so suddenly,” admits Dod Mantle. “When Ron called about this, his first question was, ‘What’s your experience of the water?’ I said, ‘I can jump off a diving board and swim a couple of lengths.’”

Before he began, Dod Mantle watched as many other films shot at sea as possible, which left him determined to avoid the pictorial quality he felt most have. “They are amazing technical achievements, but there’s a greater distance to the audience.”

Instead, Dod Mantle wanted to “bring the drama forward”. In that regard, both he and Howard were influenced by Lucien Castaing-Taylor and Véréna Paravel’s 2012 fishing documentary Leviathan. “It’s a film about fish and how they suffer at sea,” he explains. “It’s got this intensity, a different angle on things. The way the camera was placed, you somehow felt a greater empathy, a greater concern. It was more dramatic.”

For Dod Mantle it is all about embedding: “Embedding the camera and embedding the audience into the situation. It’s a brutal aesthetic.” It’s one he has used throughout his career, introducing the more classically minded Howard to it on Rush, and continuing here.

While Dod Mantle shot the main unit in the 1.1:85 format, using the Alexa, he also hid small digital Indiecams around the set, putting them “in very close proximity to not just an actor but an element. They can run longer and have a percentage of material that fails, but there’ll be moments that might be gold dust.”

That included capturing water sploshing at the bottom of a lifeboat, or the view down on deck from high up a mast. “Sometimes if you go a bit closer, in some special way, it’s an emotional truth. It’s not a cinematic logic.”

Paintings, too, were a major influence, not least on the film’s colour palette, which ranges from the muddy, gloomy darkness of the North Atlantic to the glistening, stinking yellow around Cape Horn and up into the Pacific. “I looked at Whistler, Turner, Delacroix, at a lot of American sea artists, to see how they tried to depict life at sea and thought they were visually more appropriate in depicting this hellish environment,” says the cinematographer, who sourced 50-year-old filters to achieve the look he was after.

“Turner was fascinated by the sea. You know the story of him tying himself to a mast in a storm. That’s embedding.”

In The Heart Of the Sea is a US-Spain co-production. Village Roadshow co-produced and co-financed with Warner Bros — who distributed in most major territories — and Spanish partner Enelmar Productions. Filming initially took place at Leavesden Studios just outside London where they shot on both interior and exterior tanks.

A full-size replica of the Essex was mounted on a gimbal and surrounded by blue screens. While the final film features a vast array of digital VFX work courtesy of Double Negative (the company that worked on Ex Machina), Dod Mantle says a significant amount of effects were done practically on set, in camera.

“I loaded up the effects on the faces of the actors. We had a lot of spray, a lot of wind, a lot of wobble. All the cameras were wobbling all the time,” he says.

After Leavesden, production moved to Gran Canaria in the Canary Islands for six weeks at sea, presenting a complex logistical challenge for all concerned, but especially for Dod Mantle.

“You have a whole crocodile of chaos behind you at sea,” he notes. “You have a service boat with monitoring. Smaller platforms. I had my lights out there with generators. I have support. I have marine command. Platforms with Technocranes. Pretty petrifying if a storm whips up. I was out at night, sometimes with a small crew, trying to do things that were scaring the pants off our producers. You have to work with the weather and the weather gods.”

The result of all this effort and planning represents some of Dod Mantle’s best work to date. “Without being pretentious, it’s got a painterly quality and an epic scale to it,” he says, “but it’s rusty at the edges.”

The extended sequence that begins with the whale striking the Essex, through to its sinking, was, says Dod Mantle, influenced by the paintings of 19th century French artist Eugene Delacroix.

“The 15 minutes from when the whale strikes, to the boat sinking, to them evacuating, to the fire, to the stillness, that’s got a very strong painterly quality to it,” he says.

“In all honesty, it’s one of my favourite sequences I’ve ever, ever been party to making. I don’t know how Ron feels about it but I love the sequence.”

It was filmed largely at night with top scrim lighting on a large exterior tank at Leavesden surrounded by blue screen, with the Essex mounted on a gimbal and pelted with water from both a cannon and dump tanks. “It’s a combination of all departments,” says Dod Mantle.

“You’re working on water. You’re working with interactive light. I’m doing my own light in the ceiling. There’s fire; it’s very difficult to have fire. It was complicated — dangerous at times. But always fun, no matter how gruelling.”

With the last two successive Oscars for best cinematography going to Emmanuel Lubezki for Gravity and Birdman — films in which substantial amounts of post-production work were required — there have been calls for two separate cinematography awards: for films using traditional methods and those, like Gravity, which are more computer-based.

Anthony Dod Mantle does not believe that is necessary. Rather, he says today’s cinematographers must adapt to the ever-changing technological advances and remain involved throughout the production process.

“But when the work comes back from any brilliant post house, it’ll still come back with a certain palette, a certain look, which you then have to, through the grade, get back into that thing you do and adjust accordingly. You have to control all that, right the way through to the last day. It’s all cinematography.”