BIFA: Night of the independents 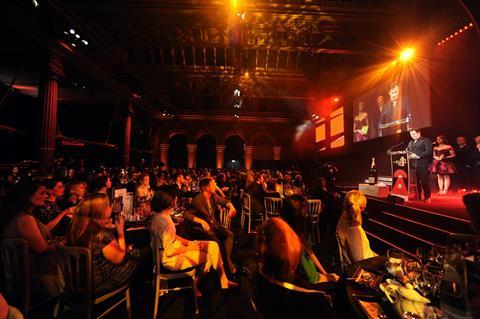 “BIFA recognition feels like validation of being part of sustaining an independent spirit and approach in the industry,” says Warp Films producer Robin Gutch of the annual Moët British Independent Film Awards (BIFAs), which will take place at Old Billingsgate in London on December 7.

“The awards are like a selective Grand National in which the outsider can sometimes win,” he says, perhaps referring to Metro Manila’s best film award last year. “It really does feel that the breadth as well as depth of the British industry is truly reflected.”

It is followed by Matthew Warchus’s Pride with seven nominations, while Mike Leigh’s Mr. Turner, Lenny Abrahamson’s Frank and Daniel Wolfe and Matthew Wolfe’s Catch Me Daddy each have five nominations.

Director Tom Hooper is the chair of this year’s jury, which votes on the winners after the BIFA pre-selection committee chooses the nominations from a longlist. The jury also includes Filth director Jon S Baird, actor Stanley Tucci and former Screen Star of Tomorrow Zawe Ashton.

Many believe BIFA’s strength lies in its diversity. “The range of films that come under the BIFA umbrella is amazing,” says ‘71 producer Lamont. “It makes it an even better feeling when the film you’ve been working on is nominated alongside the work of legends like Mike Leigh. You’re not really thinking about that when you’re out on location and into the fourth week of night shooting.”

A slew of BIFA nominations can also be a real stamp of approval for everyone involved in the film. “It is a very positive outcome for the financiers who took a big risk on the project and now have their decision vindicated,” says Lamont.

As well as giving a boost to UK films now in cinemas, such as Mr. Turner, the timing of the BIFAs can also be advantageous in terms of heaping further awards recognition onto films that have finished their theatrical run.

“You look at Brendan Gleeson in Calvary, which is a fantastic performance, but it’s in a film released in the spring,” says Alex Hamilton, managing director of eOne Films UK. Calvary has four BIFA nominations in total, including best film, best director and best screenplay for John Michael McDonagh, and best actor for Gleeson.

This year’s awards ceremony will draw the curtain on Tessa Collinson and Johanna von Fischer’s nine years as BIFA’s co-directors. “It’s the right time to move on. BIFA has grown up,” von Fischer explains of the decision they took in March and announced in September.

Under their tenure, the BIFAs have developed into one of the most respected events on the UK film calendar. Indicative of this, Collinson notes this year has been “the quietest year post-nominations for criticism and the noisiest for talking about what’s been nominated”.

Von Fischer is proud of the number of films recognised by BIFA during their joint tenure. “There is a rigour that’s put into our selection process, which our members take very seriously and commit to,” she explains. “It’s not just about the films that are nominated but all of the films that are submitted. It’s an area where new talent can be introduced to people they wouldn’t necessarily know.”

This year saw the pre-selection committee of more than 70 members view 250-plus films, a record for BIFA.

A more visible change this year is a new host in the guise of The Inbetweeners actor Simon Bird, who will take the podium from BIFA patron James Nesbitt. As BIFA’s reputation continues to grow, Collinson hopes Bird will attract an audience that “might not usually think about BIFA”.

‘There’s a rigour that is put into our selection process, which our members take very seriously’

“He brings in a younger audience, a diversity that’s really good for the awards,” she says of Bird.

Taking over from Collinson and von Fischer after this year’s ceremony are Amy Gustin, who has worked at Raindance Film Festival, and Deena Wallace, former head of film at Bafta. They are keen to establish a board to take the BIFAs forward, which will consist of the duo, Raindance and BIFA founder Elliot Grove and industry representatives.

Gustin says: “Deena and I will be doing the day-to-day work and a lot of decisions will be made at that level. But any real key decisions, for the sake of the industry, will go through the board to keep BIFA in a position where it’s wanted and needed within the industry.”

Having already worked with both of them, Grove believes he has the “dream team” to continue Collinson and von Fischer’s work. “Tessa and Johanna developed the brand and the event beyond my wildest dreams. When I met with Deena and Amy, I realised my vision for the BIFAs way back in  1998, which hasn’t changed, and their ambition for the future was absolutely aligned.”

One of Grove’s aims is to make the appearance of the BIFA logo on a film’s poster something that “distinguishes those films and hopefully gets more British eyeballs to watch those films. There’s a culture in Britain that a film isn’t really worthy unless the Americans like it, and that’s something we’ve tried to change with BIFA.”

Gustin and Wallace are full of praise for the outgoing BIFA co-directors. “Establishing an awards ceremony isn’t easy and it now has this fantastic reputation,” says Wallace. “We want to build on all of that hard work and it’s a lot easier to do because you’re talking to people who already know BIFA. It can now really help a film that otherwise wouldn’t get seen and, because of its position in the film’s lifecycle, it can do that earlier.”

Gustin agrees: “It’s a huge responsibility that we’re taking very seriously. We’re both excited by where we can take BIFA to make it even more relevant to the industry, expanding on it being the jewel in the crown for independent film and being as important to the film community as Bafta is.”

Collinson and von Fischer, who are keen to continue working together, are pleased to hand over such a successful proposition to the new team. “It’s in really good shape; it’s a really good feeling to be able to hand something over in that way,” says Collinson.

“What happens next is completely up to the new team,” von Fischer adds. “We’re saying we’re here if they want to ask us anything.”

But before they leave, Collinson and von Fischer have one final request for the industry: “We actually want to get to the after-party this year. If you see us looking serious and working, get us dancing.”