Other nominees include Dakota Johnson, Taron Egerton and Bel Powley. 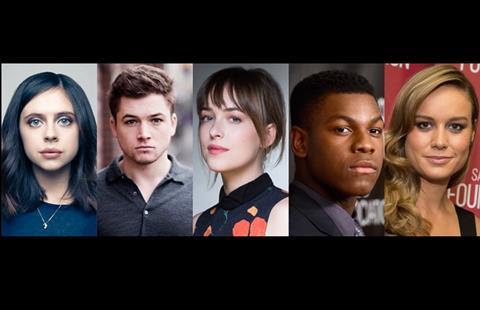 London-born Boyega most recently played the lead role of Finn in Star Wars: The Force Awakens while Larson starred in drama Room, a performance that has positioned her as a frontrunner for the best actress Oscar.

Johnson’s breakthrough role came early in 2015 playing the female lead in Fifty Shades Of Grey while Egerton took on his most high-profile role last year opposite Colin Firth in Kingsman: The Secret Service.

London-born Bel Powley, who started out in TV series MI High and Benidorm, moved into film last year with critically acclaimed drama The Diary Of A Teenage Girl and A Royal Night Out.

Egerton, Boyega and Powley are all Screen International Stars of Tomorrow, in 2014, 2011 and 2009 respectively.

The public will be invited to vote for their favourite and the winner will be announced at the Bafta Film Awards in London on Feb 14.

The award was created in honour of Mary Selway, the BAFTA-winning casting director whose career spanned three decades and more than 90 films before she died in 2004.