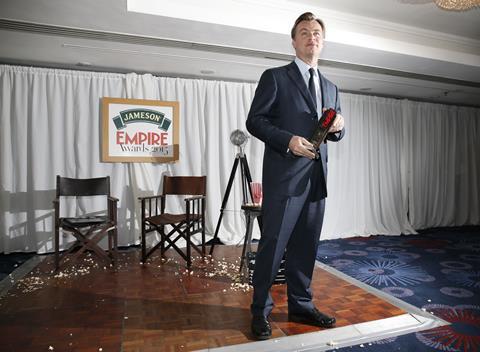 Director Christopher Nolan was at the ceremony, held at Grosvenor House and hosted by actor James Nesbitt, to collect the award alongside producer Emma Thomas and star Jessica Chastain.

Chastain, who plays Matthew McConaughey’s daughter in the film, was on hand earlier in the evening to present Nolan with the Empire Inspiration honour, which also earned the director of Inception and the Dark Knight Trilogy a standing ovation.

Nolan was back on stage shortly after to accept the best director award.

The awards, voted for by the public, delivered a surprise in the best actor category as Andy Serkis picked up the prize for his performance-captured turn in Dawn of the Planet of the Apes, beating Oscar-winner Eddie Redmayne and favourite Benedict Cumberbatch.

Taking to the stage to a roar of approval, Serkis said: “What I’m most gratified about in receiving this is that there are voice and ears out there to notice what’s happening in filmmaking… The readers are so much more well informed than most of the film industry.”

Accepting the honour from his Schindler’s List co-star Liam Neeson, the British actor-director said of his Legend award: “The ‘L’ word is best only applied to a small number of dead actors and is best treated with irony.”

Thanking those who had helped him over the years, the star of The English Patient, In Bruges and upcoming Bond film Spectre said that his “arse has been saved and occasionally enhanced” by directors.

He added: “May the spirit of J.Lo, with whom I maided in Manhattan, stop me from ever taking myself too seriously – but I am serious about the work.”

Best Sci-Fi/Fantasy
- Dawn of the Planet of the Apes
- Guardians of the Galaxy
- The Hobbit: The Battle of the Five Armies
- Interstellar
- X-Men: Days of Future Past - WINNER

Best British Film
- The Imitation Game
- Kingsman: The Secret Service - WINNER
- Paddington
- The Theory of Everything
- Under The Skin

Best Actor
- Richard Armitage (The Hobbit: The Battle of the Five Armies)
- Bradley Cooper (American Sniper)
- Benedict Cumberbatch (The Imitation Game)
- Eddie Redmayne (The Theory of Everything)
- Andy Serkis (Dawn of the Planet of the Apes) - WINNER

Best Film
- Boyhood
- Dawn of the Planet of the Apes
- The Hobbit: The Battle of the Five Armies
- The Imitation Game
- Interstellar- WINNER