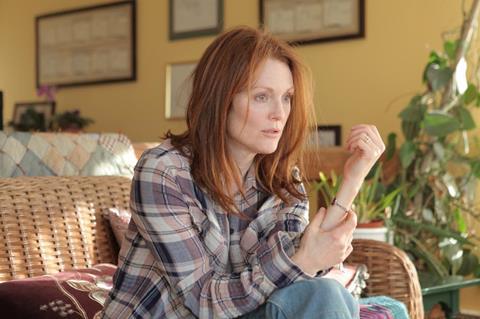 Still Alice sneaked into Toronto last September without any buzz and yet by the end of the festival it had catapulted Julianne Moore to the head of the queue for Oscar consideration.

And not before time. Many would say the star of films such as The Hours, Far From Heaven and The End Of The Affair should already have Academy Awards tucked away for a string of chameleon-like turns during an impressive career. Funnily enough, she has also had awards attention this year for a very different character - a spoilt Los Angeles actress - in Maps To The Stars.

Moore herself remains disarmingly down-to-earth about her performance in Still Alice, as a linguistics pioneer who slides inexorably into the grip of Alzheimer’s disease.

Of far greater interest to her is talking about the disease that is ravaging lives around the world and praising the contributions of her fellow cast and the directors.

Film-makers Richard Glatzer and Wash Westmoreland were particularly attuned to the subject of personal decline.

“Rich and Wash have been together for 18 years and they’re working partners and life partners and before we embarked on this movie Rich was diagnosed with [neurodegenerative illness] ALS,” says Moore.

“As a couple of film-makers they were dealing with this degenerative disease. Alzheimer’s is cognitive and ALS is physical. It progressed rather quickly. Rich did a lot of his direction through an iPad.” Glatzer’s presence and mental vitality were all the more remarkable given the time constraints of the shoot: just three-and-a-half weeks in New York in March.

Moore had received special dispensation from The Hunger Games: Mockingjay producer Jon Kilik to shoot Still Alice on a brief hiatus from the blockbuster franchise, in which she plays a rebel leader.

Her research for Still Alice took four months. “I have not had any experience with the disease personally,” the actress says. “I wanted to be really, really, really meticulous about my understanding of it.” Preparation involved regular Skype calls with three women with early onset Alzheimer’s and consultations with Alzheimer’s Association head Elizabeth Stearns and Dr Mary Sano of Mount Sinai Hospital, a leading researcher into the disease.

“I asked people what they wanted me to represent. It was an amazing process. Everybody is so incredibly committed. A journalist asked me if I felt clinical in the research but it’s impossible to feel that way when you have such a strong emotional attachment,” she says.

Slipping into the role

Moore’s homework went further than the disease. Her on-screen character, Dr Alice Howland, is a pioneer in language and at the start of the film she is already in the grip of the disease, albeit unknowingly.

An early scene in which Howland momentarily loses her train of thought during a lecture is as chilling, disturbing and poignant as anything seen on screen all year.

“Even working on her speech, this is somebody who has a tremendous ability for language so that when she is on you see what she is capable of and then when you see her stumble and looking for words you see how it is.

This is someone who never reaches for words.” Another scene of stifled terror comes while Howland is jogging along a familiar path, only to lose her sense of orientation as the cameras pull focus around her.

“I talked with a lot of people about the [sensation of] getting lost and asked them what it means, and they said it’s more of a panic attack: that feeling when your heart is beating really fast and you cannot breathe and nothing makes sense.” Overall it is Moore’s understated portrait of a person slipping away that wields the most devastating power, as anybody with experience of the disease will know.

“There are times when someone will appear to be having a better day and they appear perfectly normal and then there’s a decline,” she says.

Moore attributes much of the film’s potency to her co-stars.

“I love her,” she says of Kristen Stewart, who plays one of Alice’s daughters, Lydia. “She is such a wonderful actress and has so much emotional reserves at her fingertips. It was a thrill for me to work with her.”

And she has this to say of Alec Baldwin, her on-screen husband: “I talked Alec into doing it. Ever since I worked with him on 30 Rock, I have been dying to work with him again. He’s an outsize talent and everything he brings is amazing. I felt a lot of compassion for his character.”