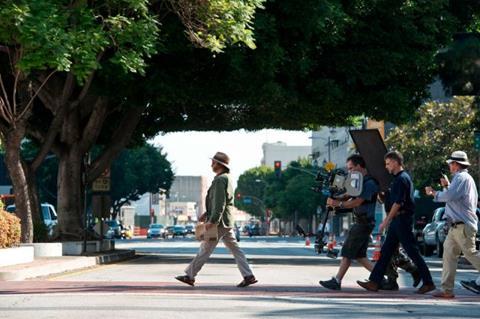 When it came to adapting novelist Thomas Pynchon for the big screen, Paul Thomas Anderson would not be denied.

“I wanted to be the man to do it, for sure. I didn’t want anyone else to do it,” the writer-director excitedly explains about taking on the famously abstruse Pynchon, whose work had until recently eluded adaptation for the big screen.

“In those moments of pride and ego and possession you can feel - whether you’re a film-maker or not - that you have a writer you love and obsess over and who you like to feel is yours. I felt that way about his work, so I wanted the job and I wanted the challenge.”

Anderson’s fourth, fifth and sixth films - Punch-Drunk Love, There Will Be Blood and The Master - were separated by five-year intervals, however, such was Anderson’s enthusiasm for Pynchon’s 2009 novel Inherent Vice that the director knew he wanted to make a film version back-to-back with his 2012 drama, The Master.

Anderson optioned the book soon after it was published and began writing the script while he was still working on The Master. There had been other suitors for the film rights but Pynchon and his team were happiest for the project to be with Anderson.

The five-time Oscar nominee is faithful but free in his adaptation of Inherent Vice, the 1970-set novel in which drug-fuelled Los Angeles private detective Larry ‘Doc’ Sportello - portrayed by Joaquin Phoenix - investigates the disappearance of a former girlfriend.

The task of adapting the tricky plot and manic energy of Pynchon’s sprawling noir worked on Anderson like a drug. “That question, ‘How do I do this? This is so fucking hard,’ that fear is probably an addictive thing. ‘Now I want to do it, now I have to do it,’ you think. That’s kind of ego and fuel.”

Anderson’s connection to Pynchon runs deeper than ego, however. While they have never spoken - contrary to reports, the reclusive writer did not visit the set - the respect between the two is as mutual as their seemingly shared world view; Anderson is the first director to receive Pynchon’s blessing to adapt one of his novels for the big screen. “Really, what it is, is feeling like you’re in connection with someone’s view of the world and view of people and their sense of humour,” says Anderson.

‘Joaquin Phoenix’s method of working is to be completely committed. He walked around barefoot for six months. His feet were disgusting’

The film is Anderson’s most overtly funny feature to date, full of dark humour, impeccable comic timing and slapstick. But it also gently plumbs the darker depths common to Pynchon’s work, including issues of surveillance, institutional abuses of power, post-war uncertainty and escapism.

To what extent did those themes inspire Anderson? “It’s funny because I never ask myself the question, ‘Why am I making this,’ and, ‘Why is it relevant today?’ because I daresay you can open the newspaper and it’s the same fucking story every time,” he says.

“Not a week goes by without [reports of] LAPD abuses of power,” he adds. “Somehow I’m still shocked. With this movie, all these moments where Doc is meant to be paranoid or suspicious and all these far-fetched conspiracy theories that Pynchon is so famous for, they aren’t conspiracy theories any more.

“The NSA spies on everything we do. What the fuck are you going to do about it? These abuses of power are flagrant and flaunted in front of us as if we’re powerless to do anything against it. I guess I’m an optimist because I’m still surprised by them even though I shouldn’t be. I always think fascism has gone out of style and there’s no way it can still exist but it’s still around.”

The characters of Inherent Vice are often as sympathetic as they are beguiling. Doc is the arch dreamer and drifter; Anderson has often revelled in eccentric, lost souls. But are these characters searching or escaping? At one point Anderson quotes Pynchon’s novel directly when he notes that American life is “something to be escaped from”.

“They are doing both,” explains Anderson. “Both wrapped up into one. That’s a nice thing that’s in the book and maybe a little better expressed than in the movie, but it’s that idea that when you’re smoking weed everything is OK, but as soon as heroin comes in everything is changed and everything is fucked, and that’s sad. Looking back at research, it was an epidemic of overdoses of all this Southeast Asian  heroin that was coming in near Manhattan Beach.”

The director takes a breath and further reflects on the line. “It’s a big line. He kind of goes for it, doesn’t he? I thought, ‘Really? Are we going to go for that or should I change it?’ I think it’s worth preserving how he meant to do it. It’s strong and it’s good. I like that line.”

While Anderson’s impeccable technical craft soars with each new film, his methodology also continues to evolve. Or devolve. A number of his actors affectionately describe the director’s style as “chaotic”.

His producer JoAnne Sellar prefers the adjective “spontaneous”. “When I think back to Boogie Nights and Magnolia, there was more design in the scripts,” Sellar says. “Many of the shots were set. Over the years Paul has become more spontaneous and fluid. We stick with the script; there isn’t a mass of improvisation but he allows himself to find things on the day.”

Anderson says of the shoot: “There was always this looseness to discover things. I had so many different drafts. There were so many potential characters to choose from so I would have different versions of scenes and I’d bring actors in a couple days before and we’d have a little rehearsal and lay out all these versions I’d written and then cut and paste a version together.

“The distance between those rehearsals and when we got there to do it would be kind of large. So everything was much more… liquid-y. It lent itself to that because there was no big, expensive thing looming over our head [the film’s $20m budget was among Anderson’s leanest]. So it lends itself to working more freely.”

Anderson - perhaps more than many other directors - has a genuine affinity with his actors. And he has seemingly found another kindred spirit to add to his brotherhood of controlled anarchy in the shape of lead actor Phoenix, who brings bucketloads of wiriness and pathos to the freewheeling Doc.

The three-time Oscar nominee immersed himself as deeply in the role - Doc’s on-screen look is partly inspired by a youthful Neil Young - as he did for Freddie Quell in The Master.

“Joaquin’s method of working is to be completely committed,” says Anderson. “He walked around barefoot for six months. His feet were disgusting. I know it’s a small thing, but I never see him in his street clothes. He gets to set every day and he’s dressed like the character. It’s small and not complicated, but it’s the kind of thing that helps make it feel good over three months [the shoot lasted around 55 days]. I’d get so nervous if I saw an actor talking on their phone, making a deal with their agent, fucking around and then you say, ‘Action’. That would scare the shit out of me.”

“I don’t think there’s anyone who has worked with Joaquin who wouldn’t want to do so again,” Anderson expanded in a recent Q&A. “I know there’s an impression he’s weird but that’s far from the truth. He’s a little weird but not that fucking weird. He’s very compassionate, very soulful. He’s inventive and creative. It’s a lot of fun. He can drive you a little crazy but he’s sweet and daring, above all.”

Daring is a quality inherent to Anderson and Phoenix alike. And as the finished film amply shows: who dares, wins.