Ruben Östlund’s Force Majeure has been chosen to compete for an Academy Award nomination as Best Foreign-Language Feature. 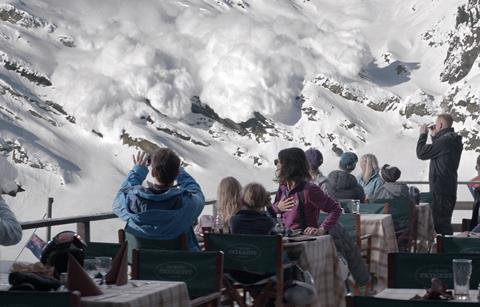 The fourth feature from director-writer Östlund, Force Majeure (Turist) world premiered at the Cannes Film Festival in the Un Certain Regard section receiving the jury prize.

The film centres on a family on holiday at a ski resort and the dynamics between them in the wake of an avalanche.

It screen at the Toronto International Film Festival this month and will compete at the 50th Chicago Film Festival, which has a focus on Scandinavia this year.

Producers are Erik Hemmendorff and Marie Kjellson for Plattform Produktion in collaboration with numerous European producers and film institute, and with production funding from the Swedish Film Institute’s previous film commissioner Lars G. Lindström. It premiered in Sweden on Aug 15, distributed by TriArt Film.

To celebrate the US theatrical release on Oct 24, a retrospective of the first 10 years of Östlund’s feature filmmaking career will premiere in January 2015 at the Film Society of Lincoln Center in New York and the Walker Art Center in Minneapolis before embarking on a three-month tour of North America.

The touring retrospective is produced by Comeback Company in partnership with the Swedish Film Institute and Plattform Produktion, with additional support from the Embassy of Sweden in the US and the Consulate General of Sweden in New York.

The Oscars’ jury is set to announce its selection of films to compete for Best Foreign Language Film on Jan 15, 2015. The awards ceremony takes place on Feb 22.

This is the second time Östlund has been chosen for an Academy Award nomination as Best Foreign-Language Feature, following the nomination of Involuntary (De ofrivilliga) in 2009 - although it did not make the shortlist.