The VFX of 'Ex Machina'

In a year of stunning visual-effects work, Ex Machina’s bewitching robot stands out as a peerless use of VFX. Mark Salisbury speaks to the team that created her. 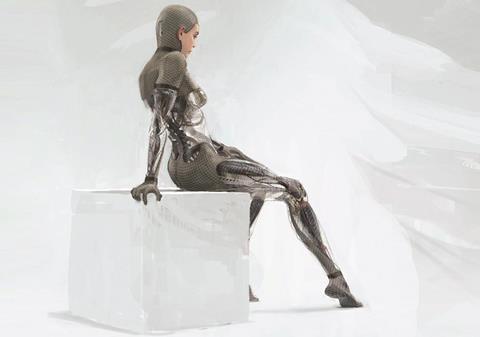 While androids have a rich cinematic history dating back to Maria in Metropolis, writer-director Alex Garland’s Ex Machina required a new kind of robot — one that was wholly plausible as a mechanical creation but feminine enough for Domhnall Gleeson’s coder Caleb to fall in love with.

As played by Alicia Vikander, Ava represents the striking combination of the Swedish actress’s controlled performance and the sterling digital work of visual-effects supervisor Andrew Whitehurst and his team at London VFX house Double Negative (Dneg).

Initially, Garland worked on Ava’s design with UK comic-book artist Jock, coming up with a series of concept paintings that he brought to Dneg. “We learnt quickly that if she’s gold in colour, she’s C-3P0. If you mechanise her torso in a particular kind of way, she’s [Maria from] Metropolis. If she’s smooth, hard, white, then you’re ripping off Chris Cunningham [and his video for Bjork’s ‘All Is Full Of Love’],” notes Garland.

“The design of Ava was a hugely iterative process,” says Whitehurst (Karl Simon Gustafsson — illustrator of the main image on this page — was part of the Dneg design team that progressed those initial concepts).

“The biggest thing we took from the designs Jock had worked up with Alex was the transparent mesh over the torso and limbs, because it meant we had the ability to see into her. That was a brilliant solution to a tricky psychological problem in that you needed to believe she’s fully mechanical, but there needs to be that element of femininity to help facilitate the emotional relationship.”

Shrewdly, Garland opted to restrict the amount of VFX shots but insist they be of the highest quality. “The onus on bang-per-buck was at the forefront of everybody’s mind,” says Whitehurst, who spent 16 months on the project, and produced around 350 robot shots out of a total 800 VFX shots. “One of the principal goals when designing her was coming up with something that could be realised in the amount of time, for the money.”

Throughout the development process, Whitehurst gave his team one simple rule: they were not allowed to look at other robots. Instead, they turned to Formula One car suspensions, high-end road bikes and even sculptures by Constantin Brancusi where “there is a mechanical but organic quality”, as well as human anatomy.

For Whitehurst, plausibility was key: “It was important there was no cheating. The muscles are in the same positions as they would be on a human, albeit a simplified form. You can see what all the parts do.”

Ava’s virtual skeleton was built from hollow aluminium because it “catches highlights better than carbon fibre”, while her muscles were wrapped in ribbons of reflexive metal that would contract like a spring to help sell the illusion of weight, substance and movement.

“It’s often subtle things you don’t consciously notice that make something plausible or not,” says Whitehurst. “The fact her muscles jiggle when she walks, even tiny amounts. The cables in her arms also move. You don’t really notice it. But you do notice when it’s not there.”

On set, Vikander wore facial prosthetics and a grey mesh suit that covered her entire body apart from her face, feet and hands. The suit incorporated black bands and brass studs that served both a practical and aesthetic purpose. “That would give us what we needed to track her performance after the fact, and would enable us to remove the bits we didn’t want and replace with CG, in the most efficient way,” says Whitehurst. “Those points gave us something to lock onto when we were trying to match Alicia’s performance.”

Given Ex Machina’s intensive six-week schedule, Garland and director of photographer Rob Hardy decided to shoot the dialogue-heavy scenes between Caleb and Ava in a limited number of longer takes with minimal lighting changes, achieving 15 to 25 set-ups a day. Such an approach precluded using either green screen or motion-capture techniques.

“We knew we had to be very flexible and very quick, so we came up with a method whereby Alex could shoot the scenes as if there were no visual effects at all,” says Whitehurst. “When they’d done enough takes of each set-up, about three on average, we’d get the actors to step out and get Jennie Paddon, the focus puller, to shoot a clean plate trying to match the action of the camera as close as possible. Then I would step in and take a set of high dynamic-range photographs to capture the lighting on set.”

Working from that footage and reference material, Dneg replaced Vikander’s body with a digital double while retaining the actress’s real face, hands and feet.

“There are only a handful of shots where we had to replace hands or feet or do a little bit of CG face work,” says Whitehurst. “The shape of the robot is slightly different than the shape of Alicia. But 95% is exactly what she did on set duplicated with animation.”

What made the task much trickier was the length and static nature of the shots themselves. Typically in Hollywood films, VFX shots tend to last three seconds. In Ex Machina, they were around eight, with one shot running to 1,600 frames — more than a minute in length.

After filming wrapped, the production discovered they had money left over in the budget — funds that had been allocated for reshoots. They were able to plough this unexpected bonus into enhancing the VFX work that had already been completed as well as adding a further 80-150 VFX shots to reveal the inner workings of Ava’s head and neck, which had originally been covered by grey mesh.

“It helps the overall balance of design of the character, not just from an aesthetic standpoint but also narratively,” says Whitehurst, who was recently awarded the BIFA for outstanding achievement in craft for Ex Machina, as well as a place on the Oscars VFX shortlist alongside the bigger budgeted titles Star Wars: The Force Awakens, The Martian and Mad Max: Fury Road.

“There isn’t a single shot of her where you’re not reminded she’s a machine and, psychologically, that’s very important.”