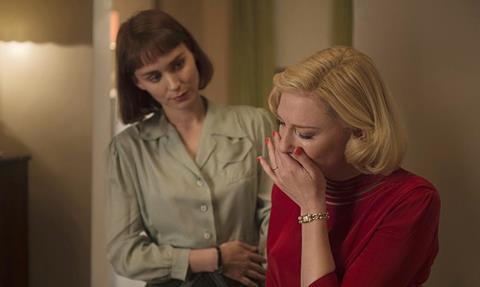 In other key awards, the Toronto Film Critics Association cited Tom Hardy as best actor for playing Ronnie and Reggie Kray in Legend and Nina Hoss as best actress for Phoenix, which also won the Best Foreign-Language Film prize.

Joshua Oppenheimer’s The Look Of Silence won the Allan King Documentary Award. The film is a companion piece to Oppenheimer’s 2013 winner The Act Of Killing.

TFCA membership chose the three finallists for the $100,000 Rogers Best Canadian Film Award – The Forbidden Room by Guy Maddin and Evan Johnson, My Internship In Canada by Philippe Falardeau and Sleeping Giant by Andrew Cividino.

As previously announced, the 2015 recipient of the Technicolor Clyde Gilmour Award is Deepa Mehta, who will present a filmmaker of her choice with C$50,000 worth of services from Technicolor at the January 5 gala.

“This year’s winning films encompass a remarkable diversity of genres and styles,” said TFCA president Brian D Johnson. “And the Canadian finallists present a broad spectrum of talent — a veteran Winnipeg auteur who remixes cinema like a mad alchemist, an Oscar-honoured Quebecois who’s made a bold turn from intimate drama to sly political satire, and a young Toronto director making his feature debut with a Lakehead coming-of-age story that dazzled Cannes and TIFF.

Winner: The Big Short, Charles Randolph and Adam McKay. Based upon the book by Michael Lewis.

Runners-up: Anomalisa, Charlie Kaufman based on his stage play; Carol by Phyllis Nagy based on the novel The Price Of Salt by Patricia Highsmith; Spotlight by Josh Singer and Tom McCarthy

Runners-up: Anomalisa; Inside Out

Winner: The Look Of Silence

Runners-up: Amy; Listen To Me Marlon

My Internship In Canada, Philippe Falardeau